Ending discrimination begins with us 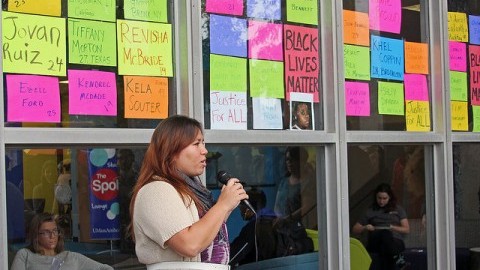 I’d like to start by saying I am not an expert when it comes to institutional racism, diversity awareness, civil rights and social justice – I have a rudimentary understanding at best. My sources of knowledge on these issues come secondhand; from newspapers, online articles and word-of-mouth stories. I myself have never been discriminated against based on my race, gender or sexual identity. As a white, heterosexual man, I’ve never had to deal with these issues personally, and likely never will.

This past spring, at Pennsylvania State University’s graduation ceremony, bomb threats targeted at African American students prompted the University to mandate metal detector screening for all students and guests. Last November, at San Jose State University, four white students were expelled for barricading a black student in his room, displaying a confederate flag and writing the N-word on their common room’s white board. In 2013, a multicultural dorm at Lehigh University was egged and spray painted with profane racist language, seven years after a skinned deer head was left outside the building. In February, a female African American student at the University of Mississippi was doused with an alcoholic drink at her apartment complex and told, “you can’t live here, you’re black.”

These are just a few instances of many from the “Campus Racial Incidents” page on the Journal of Blacks in Higher Education’s website. The page compiles recent hate crimes and incidents occurring on college campuses in the United States. The most current incident listed? “Racist Incidents at the University of Massachusetts.”

I have confidence in the administration of the University that they will handle this situation “well.” Chancellor Kumble Subbaswamy has reacted swiftly by promising of a comprehensive update to the University’s diversity policies by the end of the semester.

However, the impetus for change falls on us – the students. It’s easy to look at one student’s actions and see how wrong and inexcusable it is. The abhorrent, disgusting nature of writing racially charged threats on a student’s door is something we can all agree on. It’s much harder to look at ourselves and our own behaviors and ask not only if we do anything to perpetuate a community where discrimination occurs, but also if we do anything to actively make our community a more accepting and diverse community.

How many times have you or someone you know said, “that black kid who lives next door to me” or “my Asian TA” or “my gay friend.” Discrimination does not begin and end with hate crimes. It starts with every one of us and ends when we no longer distinguish people based on these characteristics.

Let’s keep this conversation going. Don’t stop asking questions. In the words of our famous library’s namesake, W.E.B. DuBois, “Ignorance is a cure for nothing.”