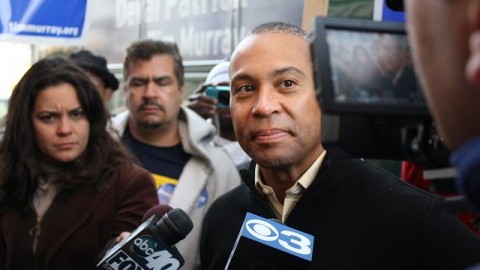 The funds will be used for the North Downtown Improvement Project, which will allow Amherst to reconfigure East Pleasant and Triangle Street by burying wires and utility lines in an effort to create space for economic development.

The award is part of a statewide $66 million grant that will go toward funding development projects across the state. In total, the grant is expected to help fund 31 new infrastructure projects across Massachusetts.

Speaking under a tent to about 100 people, Patrick said, “This improvement will serve as a catalyst for local investment that supports existing business along this very busy corridor and fosters new retail and housing growth in the district.”

Following the announcement, Patrick toured the Kendrick Place construction site, which is located across the street from the park. Once completed, that site will be home to 36 market rate living units and provide 4,800 square feet of commercial space.

Also in attendance was Amherst Town Manager John Musante, who said the award was “huge” for Amherst.

Musante referenced the creation of an innovation district, as laid out in a recent report produced by U3 Advisors that was funded by the University of Massachusetts in cooperation with the town.

The report suggested creating mixed use spaces like Kendrick Place for business, learning, making and living.

The funds that will help bury the utilities will make development easier and save space in town, preserving the small town character of Amherst while providing more housing.

According to the findings in a recent report funded by UMass and Amherst, housing is in very short supply.

“Housing in Amherst is expensive relative to surrounding towns and getting more exclusive as housing supply does not keep pace with local demand,” cited a report by the Philadelphia-based U3 Advisors.

Both UMass and town officials hired the advisors to complete a town analysis that addressed growing concerns over affordable housing.

According to Patrick, this award is the first of its kind given to Amherst.

“Some of the grantees (in the state) have won other grants in the past, this is the first one that Amherst has won,” Patrick said.

According to Patrick, these grants are meant to stimulate growth, not simply fund individual projects.

“The whole point of these MassWorks grants is to catalyze private sector development and growth so they’re not just one off projects,” he said.

Jason Kotoch can be reached at [email protected]