Group Halloween costumes inspired by the roles of Hollywood icons 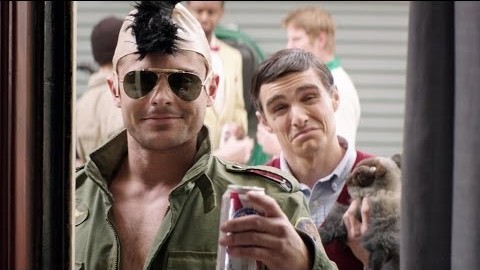 Halloween is an amazing time of year in which the creative weirdo in all of us gets to come forth through whatever ridiculous clothing you want. Coming up with that wonderfully weird, scary or hilarious costume can be often difficult for one person, but it can be downright stressful to come up with a single cohesive costume theme for a group of three or more people.

Here’s a simple solution – look to Hollywood for inspiration. Start with a couple of actors or actresses who have been around for a little while, preferably some who have had quite a few iconic or relatively well-known roles in the past. Next, look through their roles and seek out those that are known well enough that people will get them at first glance. As long as your group can all agree on one actor or actress and you don’t all want to be the same character, then you’re on your way to looking like one awesome group this Halloween. If you can’t all agree on a single actor or actress, then you need to find a new group because you clearly are not friends with those people.

Here are just a few examples to get your creative juices going:

Nicolas Cage
When it comes to choosing a single actor with a good variation of roles, there is no better candidate than Nicolas Cage. Due to poor life decisions and crippling debt, Cage’s characters are similar to many of the costumes you’ll see at any party this weekend – some are great and interesting, others are awful and the rest leave you wondering what exactly you are looking at. Of the plethora of strange characters in Cage’s stable, the best suited for Halloween would have to be Benjamin Franklin Gates (“National Treasure”), Big Daddy (“Kick-Ass”), Edward Malus (“The Wicker Man”), Cameron Poe (“Con-Air”) and Castor Troy/Sean Archer (“Face-Off”). Many of these roles are easy to dress up as – just make sure that whoever dresses as Edward Malus is willing to put in a little effort in the acting department. As the character was mostly in a suit in “The Wicker Man,” people probably won’t know who you are. I recommend adding the helmet of bees to the costume, as well as spontaneously falling to the ground and screaming a lot. If you’ve seen this film you’ll know this is probably the same direction Cage himself received on set, so it’ll be extra authentic.

Jennifer Lawrence
J-Law didn’t become America’s sweetheart just because of her hilarious personality and nonchalant attitude toward fame. Most of all she is an incredibly well-rounded actress with some fantastic roles under her belt. It is almost mandatory that someone dresses as Katniss (“The Hunger Games”), but to fill out the group you might have to get a little creative. If someone is willing paint themselves blue and dye their hair bright red to be Mystique (“X-Men: First Class”), all in the name of Halloween, then you should find that person and become friends with them. They are awesome. Other characters that are a little more doable include Rosalyn Rosenfeld (“American Hustle”), Tiffany (“Silver Linings Playbook”) and Ree (“Winter’s Bone”). They might need a little more effort in the acting department, but it’ll be more than worth it if you can pull them off.

Jim Carrey
While Carrey’s film career has been quiet in the past few years, many of his roles from the mid-90s to the early 2000s are perfect for this group costume concept. Carrey has a distinct manic style, which flourished in many of these roles. Characters such as Lloyd Christmas (“Dumb and Dumber”), the Riddler (“Batman Forever”), the Mask (“The Mask”), Ace Ventura (“Ace Ventura: Pet Detective”) and Charlie Baileygates/ Hank Evans (“Me, Myself & Irene”) all have pretty distinct looks, but at the heart are very similar. To ensure you don’t end up as a group full of people acting the same way, be sure to include some lines from the characters in your night long performance. Especially lines like, “According to the map we’ve only gone four inches,” from “Dumb and Dumber” or “Ooh, somebody stop me!” in “The Mask” need to be used whenever appropriate throughout the night.

Natalie Portman
Portman might not come to mind right away, but a look into her career reveals quite a few well-known and really distinct roles. As a bonus, all of them are from recent and popular movies, so you won’t have to waste time explaining who or what you are. Characters such as Nina Sayers (“The Black Swan”) and Padmé Amidala (“Star Wars”) offer really interesting costume opportunities that will help you stand out no matter where you end up. Evey (“V for Vendetta”) should be reserved for die-hard costumers only who are willing to either go bald or wear a bald cap all night.

These are just a few of the actors and actresses whose characters your group-themed costumes could be focused on. The amount of effort everyone puts into their respective roles, such as the accuracy of costumes, acting the part and the number of famous lines they can work into conversation throughout the night will determine how successful your group’s costumes are. So choose your group’s favorite actor or actress, commit to your roles and you’ll be on your way to being the best dressed this Halloween.

Cory J. Willey can be reached at [email protected]