In a battle of winless teams, the Minutemen are hungry to get their first win of the season at Miami (OH) 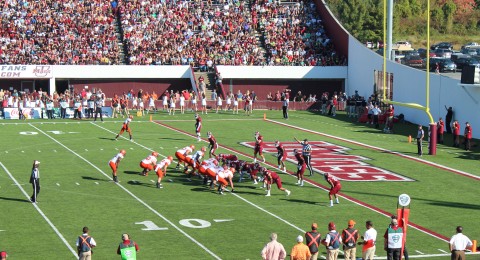 It’s hard to find a team in Division I football that has experienced the same struggles that the Massachusetts football team has endured over the past three seasons.

Luckily for the Minutemen, they’re facing that team on Saturday.

The Miami (OH) has shared similar frustration that UMass has faced over the past few seasons and currently have longest active losing streak in college football at 21 consecutive losses. Its last victory came on Oct. 27, 2012, when the Red Hawks upset then-No. 23 Ohio in a 23-20 thriller.

When looking at the Red Hawks (0-5, 0-1 Mid-American Conference) the similarities between them and the Minutemen are eerily similar. Both teams are under the leadership of a new coaching staff, both have transfer quarterbacks running the offense, and. most importantly, both are winless and have found ways to lose leads late in the fourth quarter against teams that on paper that are better.

“We don’t look at them as an 0-5 team that’s bad. They’ve had a lot of close games and games that they should have won. It’s the team that plays four quarters on Saturday is going to win,” safety Joe Colton said.

If this seasons similarities between the Minutemen and Red Hawks isn’t clear enough, here’s one that might catch people’s attention. Last season, both teams entered their sixth game of the season at 0-5. UMass squeaked out a 17-10 win after Rob Blanchflower had his touchdown reception fall into his hands to secure the win for the Minutemen.

Although Miami is still winless on the season, a big part of its turnaround can be credited to new head coach Chuck Martin and quarterback Andrew Hendrix, both of whom came from Notre Dame prior to the season. Martin was the offensive coordinator and quarterback coach for the Fighting Irish when they made it to the BCS National Championship game in 2013. Martin also won two national championships with Grand Valley State in Division II.

Hendrix is a duel-threat quarterback that has shown that he isn’t afraid to air it long down the field, as well as the ability to step up in the pocket and run for first downs as well. Despite having problems with his accuracy (45 percent completion rate this season), Hendrix has thrown ten touchdown passes this season. The Red Hawks have only two rushing touchdowns on the season.

“We can’t underestimate them. They’re at the same spot as us, and they are eager for a win just as much as we are,” linebacker Jovan Santos-Knox said. “The game is like a chess match. I think it’s a lot of fun and that’s how the game should be. We have to get off the field more, which will solve a lot of our issues.”

Last Saturday against Bowling Green, UMass’ defense was on the field for 108 plays. The Minutemen can expect a similar up-tempo, spread offense from the Red Hawks who love to call their plays at the line of scrimmage.

“Playing MAC schools is more strategy. Instead of trying to bully you around, these teams feel like they match up better with you and will try to beat you using their own stuff. We’ll have to be ready for trick plays and other spread ball stuff,” said Colton.

Looking to build off of last week’s record-breaking performance is quarterback Blake Frohnapfel, who finished with 589 passing yards and five touchdowns. Frohnapfel has already thrown for two more touchdown passes this season than UMass did in the entire 2013 season.

When asked what was in store for the encore performance Frohnapfel just laughed and said he’s already moved on from it. One thing is for sure though: Frohnapfel is much more concerned with getting the first win than re-writing the record book.

“They’re in the same situation as us,” he said. “ They’re improving and a good football team. We both know how the other team is feeling and we hope it’s us that come away with a win on Saturday.”

Kickoff from Yager Stadium is set for 2:30 p.m. and can be seen on ESPN3.com.