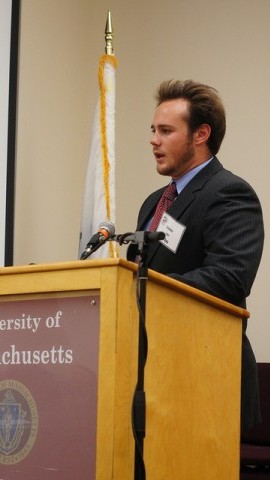 With a debate underway about an amendment concerning the University of Massachusetts’ student confidential informant program, several Student Government Association members expressed support of the policy, saying improvements can still be made.

Tyler O’Day, a sophomore and chairman of the Committee on Diversity and Student Engagement, said he believes the permanent abolishment of the program is a rash decision, and other options should be considered further.

“I do think the basis of it is a good program, decreasing widespread drug access on campus,” O’Day said. “Yes, there was an absolute tragedy in the death of a student, but at the same time, we still have no idea how many deaths this program has already prevented.”

He noted that he sees the program as abolished until Chancellor Kumble Subbaswamy says otherwise. Subbaswamy suspended the program two weeks ago until a full review can be conducted.

The amendment caused a heated debate at last Monday’s SGA meeting, which was left open-ended until the next meeting on Tuesday. O’Day said he believes the extra week will give SGA members a chance to think about the decision before it is made.

“A lot of the time, the SGA likes to act like the sky is falling without seeing if it’s raining first,” he said. “It’s a habit I don’t want us to get into. I want us to maintain an open mind in all cases.”

O’Day explained that his opposition to the amendment stemmed from a disagreement with its wording. He said he believes there should be changes made to the program, and if those changes do not help, the program should then be abolished.

However, he said he supported a draft of the amendment which said, “Be it resolved that if significant changes to increase student safety and access to treatment resources cannot be made to the confidential informant program in use by UMass Police Department, the SGA calls for the permanent discontinuation of the program.”

The current amendment, however, says the program should be completely abolished without mention of considerations for reform.
“If a program cannot keep kids out of harm’s way, it should not be in place,” O’Day said.

O’Day continued, “Being an informant could bog someone even further down the drug culture, and that shouldn’t be the aim of the program. It should help snuff out some of the drug culture on this campus while giving these kids the option to engage themselves in some drug rehabilitation program, and if not, there needs to be some sort of oversight. If we can’t find a program that meets the needs of the students, that’s another scenario the program should be killed.”

Ryan DiZoglio, a senior and senator for the SGA, shares a similar view on the confidential informant program.

DiZoglio said he didn’t know the program was in effect until the Boston Globe article was published, and was shocked.

“As I read on and on, I felt that there was a disconnect with the UMPD in the story,” he said.

DiZoglio said there should be major changes made to the program if it’s kept in place.

“From what I’ve heard, it’s not monitoring these people properly. It sounds like coercion because of the fact that the options are doing the program or going to jail, and you’re not guaranteed your charges will be dropped,” he said.

DiZoglio sees the benefit of the program impacting the drug culture on campus, and believes that if the program is dismantled, the problems will get swept under the rug.

“It seems like here, either it’s good and it stays, or it gets dismantled and gets swept away,” DiZoglio said. “We need to fix these problems. Just dismantling it is the easy way out.”

Both DiZoglio and O’Day have spoken to students on campus and heard a number of opinions ranging the full spectrum of those held by SGA senators in the debate.

DiZoglio looked to some possible changes the program could undergo, such as more drug treatment, closer monitoring of those involved in the program and giving students counseling without charge.

“The University needs to focus on education and different outreach possibilities with them,” DiZoglio said. “This university is lacking in that area.”

DiZoglio said he is worried about the future if the program is abolished.

“We need to stop looking for the easy way out,” he said. “This could be a valuable asset to the University. If it ends up being dismantled, it’s going to be swept under the rug and Logan (Eric Sinacori) is going to be forgotten.”

“It’s too early to put a hammer down on this thing. I think we need to wait it out,” O’Day said. “Us saying that we want this thing ended will not end it. As it is now, it’s ended unless the Chancellor says otherwise.”