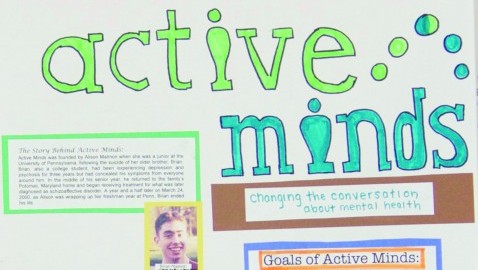 When students think about where to go for help with mental illness, some of their first thoughts may be University Health Services or the Center for Counseling and Psychological Health.

However, a national organization, known as Active Minds, has been working on the UMass campus since fall 2011 to provide a safe and comfortable environment for students to openly discuss their experiences with mental illness, promote awareness and stomp out stigma in the community.

Lizzee McKibben, a UMass senior, got involved in Active Minds her freshman year after browsing through the Campus Pulse website and seeing the organization at an activities fair. When she first joined, it had only been a club for about a year, but she and other group members helped build it up to where it is today.

Jessica Capri, a senior, and Kate Leddy, current President of the club and an assistant editor at the Massachusetts Daily Collegian, both joined Active Minds their freshman year.

Capri recalled how much smaller Active Minds was before it grew to become the Five Star Chapter it is today.

“It was originally just a group of five people and we would meet at UHS,” she said. Capri first heard about the club at New Student Orientation, and has been involved since.

McKibben said she was drawn to the organization because of her interest in psychology, and had her own experience with depression and anxiety in high school.

“I was looking for a club that would provide me with a community where I could be open with my struggles,” she said. “Because I was from a very small school, it was very much stigmatized, and I knew talking and being open about myself was the best way to feel better.”

Leddy found the club at the activities fair.

“I was looking for something that had to do with mental health because I didn’t find too much support at CCPH,” she said. “When I went to the first meeting, I found Active Minds was a good group. It was a safe place for people to talk and really actually change conversation about mental health, which is what Active Minds is.”

McKibben echoed Leddy, saying she thinks the campus culture is not yet open to talking about mental illness.

“You can hear, ‘talk about diversity,’ and you’ll have people say, ‘this is my religion, this is my racial background.’ It’s very rare that someone will come up and say ‘this is my mental illness,’” she said.

Capri stressed that Active Minds is not a place for counseling, but rather, it was founded to improve the existing counseling centers on campus.

“We’re here to help give CCPH feedback and to help them better their services,” she said.

The relationship between CCPH and Active Minds is one Capri and Leddy both describe as a “partnership.”

“Active Minds serves as a bridge to CCPH because a lot of what prevents people from getting help is these stigmas that we are fighting,” Leddy said. “I think when people come here, they feel more comfortable. It helps encourage getting help from the University.”

From the original group of five people, Active Minds has grown to include more than 300 students, though the number who attend meetings may vary.

“Meetings used to be very, very small, with maybe 10 people max, and we’ve expanded that to between 30 and 60 people per meeting,” McKibben said.

She also noted attendance often depends on the topic that’s being discussed. One of the most recent panels was on suicide prevention, and had a turnout of more than 60 people.

Meetings are open to everyone, not just members of the Executive Board. And as far as the E-Board positions go, Leddy said Active Minds tries to be all-inclusive when it comes to positions of power, and listed various titles with different responsibilities.

The club comes together to plan different events throughout the year, according to McKibben. This month, Active Minds is organizing a “stigma tree,” a visual representation of stigma on campus. Students can write specific experiences or perceptions of mental illnesses on a sheet of paper and hang it on the tree.

The club also plans to hold its third annual Walk Off Stigma event next semester.

Both Leddy and McKibben acknowledged the impact Active Minds has had on their college careers.

“It has given me an opportunity to learn how to express myself without shame, to be confident in the decisions I have been making and confident in the voice I have through mental health and mental illness,” McKibben said.

“Active Minds helped me in how I perceive mental illness, and it opened my eyes to how much a group of people can really do,” Leddy added.

But this impact isn’t limited to just club members.

“I really think when a group of people with the same passion come together, they can really help one another and make a difference in the University and how everyone perceives mental health,” Leddy said.