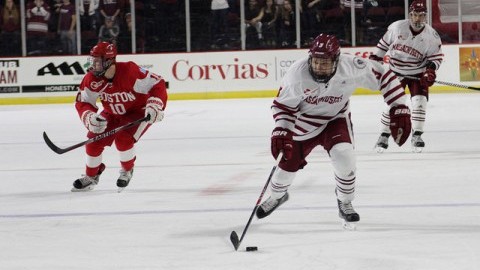 In any college sport, it’s rare for freshmen to step in and contribute right away. Usually, the larger size and faster speed of college opponents results in new players struggling to adjust early in the season, and generally it takes a few weeks for freshmen to get their feet wet.

For the Massachusetts hockey team, three players are bucking that trend.

Freshmen Patrick Lee, Jake Horton and Keith Burchett have all contributed early for the Minutemen. Burchett and Horton have scored two goals each, and Lee has also added one tally on the year. Together, they account for five of the team’s eight goals on the through two weekends of play.

Before the season, UMass coach John Micheletto said the nine freshmen joining the Minutemen would have to contribute right away. It’s doubtful, however, that he expected over half of the team’s scoring to come from the class of 2018.

But that’s exactly what has happened. The freshmen have been put in scoring situations, and so far, they have produced.

Lee, a forward from Calgary, Alberta, has settled into a spot on the second line for UMass early in the year. Playing with sophomores Steven Iacobellis and Ray Pigozzi, Lee has added two assists to go along with his goal and has generated multiple scoring chances through three games.

“Patrick has ridiculous hands to go along with his hockey sense,” Micheletto said. “Playing with those two guys is really good for him in the early going to learn how to approach work every day.”

Lee’s goal came in a crucial spot for the Minutemen over the weekend. Tied 3-3 with Michigan State in the closing seconds of regulation, Lee received the puck in a shooting position near the left faceoff dot. He fired a shot towards the top left corner of the net, and it beat Spartans goaltender Jake Hildebrand to give UMass a 4-3 lead with only nine seconds left to play. The Minutemen would hold on for their first win of the season.

Horton also notched a highlight reel goal in the win against Michigan State. Jumping into the rush from his normal defenseman position, Horton finished a sweet sequence of passing between Iacobellis and Pigozzi that ended with him scoring from close range on the right wing.

The defenseman from North Plymouth, Minnesota has shown a scoring touch early in the season. Along with another goal in the season opener against Boston University, Horton has put 11 shots on net, and is quickly evolving into a much-needed scoring threat from the blue line.

Burchett has also provided a scoring punch early in the year. Thanks to a two-goal effort in UMass’ Friday night loss to the Spartans, the Oak Brook, Illinois native is tied with Horton and Iacobellis for the team lead in goals with two. He’s played bottom-six minutes for the Minutemen, but has still found a way to be a productive offensive player, something that Micheletto attributed partially to his hockey sense.

“He’s got good skills, but his sense is able to elevate his game to a higher level,” Micheletto said. “He’s very good in tight, he sees plays develop before other a lot of other guys, and he’s got a good enough stick to make those plays happen.”

If UMass hopes to build off its first win of the season and continue its success this weekend against Northeastern and Boston College, the trio of freshmen are going to have to continue scoring. The Minutemen have a lot of production to replace after losing their top three scorers from a year ago to graduation, and Micheletto said he is counting on the freshmen to help replace that production.

“We’re anticipating that all of those guys are going to have to be productive for us,” he said.

Despite how good they’ve been, though, it may not be realistic for the trio to continue scoring at their current rate. Defensemen like Horton rarely lead their team in goal scoring in hockey anymore, and Burchett is sporting an unsustainable shooting percentage, as he’s scored on half of his shots this season.

However, the freshmen have proven they have the capability to contribute offensively. If they can chip in here and there, it will go a long way at the end of the year in terms of UMass’s overall success.