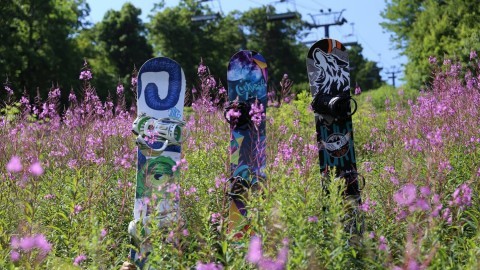 For many students at the University of Massachusetts, graduating college implies the inevitable transition into the real world, something that often includes entry level jobs and an influx of adult responsibilities. For recent alumni of the University, Tim Reilly and Patrick Rodgers, their lives after college took a different turn.

Both graduates from the Isenberg School of Management in 2013, Reilly and Rodgers developed their own snowboard company, Juke Snowboards. With the help of Reilly’s friend Bill Connolly, the company has grown continuously since its original development in 2010.

“When (Bill and I) started, I guess we never thought it was going to be a business,” said Reilly, who described the development of their business as an ironic opportunity beginning in 2010.

“We normally spent our summers wakeboarding on our boat, but our boat broke down,” he added. That said, they found themselves searching for an alternative hobby to fill the time between academic semesters. According to the official Juke Snowboards website, “Not knowing how to continue our summer other than working our crappy side jobs to help build up our bank accounts for going back to college, we knew we needed to do something we truly love in the meantime.”

At this point, Reilly and Connolly made the decision to invest their time and efforts into researching and building snowboards.

Building their first snowboard press by hand in 2010, the company was successful in building their first board that winter, which was tested at the Mullins Center. While this proved to be a success, the Juke Snowboards crew recognized several technological aspects of the board that needed to be improved.

“It’s been a long time to perfect it, and a lot of time and effort,” Reilly said.

After producing several functional snowboards from their original, homemade press, the company was ready to sell them to the public, according to Reilly.

Juke Snowboards also accumulated enough funds at this time to build a legitimate press. According to the website, this new press included, “two new heat blankets, an aluminum track, adjustable frame/mold and much more.”

The addition of the new press enabled Juke to build the Tribal, followed by the Enigma, the Solar and the Apache, all of which are snowboard builds currently being sold by the company.

With their own shop located in Northborough, Reilly, Rodgers and Connolly have made large efforts toward building up the company, and are hopeful for the opportunities that lie ahead.

And while great strides have clearly been made for Juke Snowboards, the company is still looking to expand. For this reason, they launched a Kickstarter, a campaign initiated towards raising money to continue funding their project.

According to Reilly, Juke Snowboards was funded prior to this time with the help of a friend and their own personal funds, as well as through a small business grant that Reilly received from the University.

As the company looks to expand, however, Juke Snowboards is hoping to raise more money and further expand on the ground they have already covered.