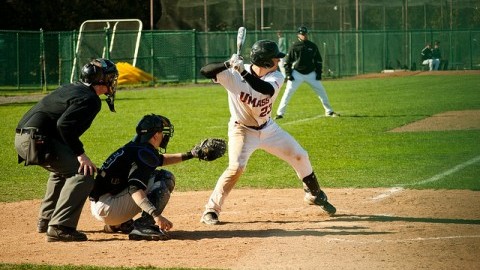 While Sunday afternoons in October are often reserved for watching football, baseball could be felt in the air last Sunday as the Massachusetts baseball team took on Dartmouth College in a fall exhibition game at Earl Lorden Field.
UMass prevailed, 7-1, as it beat the Big Green (18-21 last season) behind 12 hits and five stolen bases.
The weekend matchup was the first game the Minutemen played since concluding their previous season in the spring. According to UMass coach Mike Stone, the Minutemen showed signs of potential as they prepare to head into the winter offseason.
“Offensively, we put pressure on people and made things happen that way,” Stone said. “I think that could be a strength.”
The “small ball” strategy was big for UMass on Sunday. By stealing five bases and bunting on numerous occasions, the Minutemen put a lot of pressure on Dartmouth.
“You have to (play small ball),” Stone said. “Division I baseball is that kind of game.”
This pressure caused the Big Green pitchers to lose some composure on the mound and focus more on the base runners rather than the batters. This worked to the Minutemen’s advantage, allowing them to compile 12 hits in their offensive display.
Five different UMass players recorded a stolen base, coming from batters positioned in various spots of the lineup. By having this balance, it allowed the team to actively keep runners on the bases and in scoring position. Twice in the game, a stolen base resulted in the Minutemen scoring a run.
This aggressive play could be a precursor to the style of play that UMass may look to implement in the spring. According to Stone, though, it’s still a work in progress.
“I don’t know that yet, it’s too early to tell,” Stone said. “We have to develop some more toughness than maybe we’ve had in the past.”
Despite Sunday’s victory, the Minutemen enter the offseason with points of emphasis to improve, including the team’s defense, according to Stone. In the fourth inning, UMass committed three errors, including two by pitcher Andrew Grant, which resulted in Dartmouth’s only run of the game.
“We need to be strong in three areas to be a good team,” Stone said. “We need to be strong on the mound, defensively and we need to put pressure on offensively.”
Going into the offseason, the Minutemen can reflect on how they finished last season, in which UMass placed last in runs scored (191) within the Atlantic 10 Conference and second to last in hits (397). In addition, the Minutemen finished second to last in stolen bases with 28.
Based on Sunday’s exhibition matchup, UMass looked poised to improve on these offensive categories.
“I think we have a chance to be a good ball club,” Stone said.
He added that the Minutemen “just need to clean up some things and make consistent improvement starting this week.”
UMass has one more exhibition game against Dartmouth – scheduled for Sunday, Oct. 12 – before it breaks for the winter.

Philip Sanzo can be reached at [email protected]