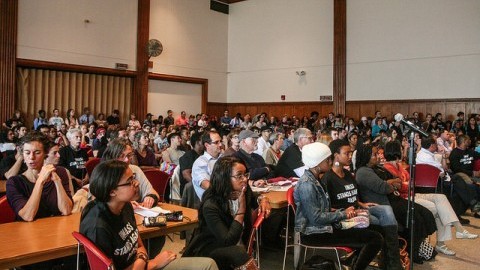 This meeting, which was planned last spring by Student Bridges, comes in the wake of three acts of racist vandalism on the doors of students living in on campus that occurred over the weekend.

“No voice can be too loud in condemning the actions we have seen this past week,” said Chancellor Kumble Subbaswamy in his opening statement to the packed room of students, faculty, staff and community members. “These kinds of horrible things will not derail us from the constructive conversations we want to create and pursue.”

Subbaswamy spoke of the importance of replacing acts of omission – statements such as “I haven’t done anything to make anyone uncomfortable” or “I haven’t done any act of discrimination” – with acts of commission, such as asking, “What have I done lately in order to create a better community?”

He called to the committee to form an action plan by the end of the fall semester.
“One thing that comes through very clearly is a sense of isolation that our minority communities feel on this campus in the classroom and outside of the classroom,” he said.

“Today especially we want to remember those who were targeted – those individuals who came to our community to fulfill their dreams, complete their degrees, and contribute to their communities – we want to lift those people up and lift up the folks who have felt that pain uniquely because they have lived those experiences.”

Gelaye detailed the steps UMass takes to respond to acts of racism in the community, as well as campaigns for prevention on campus, such as the bystander-empowering campaign UMatter at UMass.

Microphones were then opened to all in attendance, and dozens of UMass students and staff, members of the Five-Colleges, and alumni shared their experiences, sentiments and suggestions with the committee.

Suggestions included course requirements on other cultures, increased social justice training for professors, the UMass Police Department, residence assistants and residence directors, and an increase of bodies of color on campus.

“There is an enormous task involved of sifting through the applications to UMass,” said Subbaswamy. “Sometimes we use extremely easy definitions of who are high achievers and who will succeed here. We need to reexamine those assumptions.”

Many students expressed concern with the use of language in the Chancellor’s email to the students informing them of the vandalism that occurred over the weekend.

“We need to change the way that we speak to one another and the way we speak to the administration … we need to stop sweet-talking these things,” said Josh Odam, a legal studies and political science major and secretary of diversity for the Student Government Association. “We need to step away from respectability politics. We need to call it like it is.”

“Campus leadership must be accountable in its response to racism on our campus, which manifests in the individual acts but is embedded in the structure of our society and our institutions,” the statement said. “The recent hate crimes on campus are evidence of an epidemic present in our communities and our nation as a whole, which if ignored will continue to destroy us all. These heinous acts are but symptoms of an illness that circulates through the veins of our society.”

Representatives from other areas of campus, including Charlana Simmons, director of Student Success and Diversity for the College of Natural Sciences, asked the board how to support students and diversity without an operating budget.

Subbaswamy responded that part of the board’s strategic plan will entail funding for diversity.

The Center for Education Policy and Advocacy named a specific set of demands for the board, including increased funding for the Center for Multicultural Advancement and Student Success, a five percentage point increase in recruitment and retention of underrepresented minorities in the next three to five years, Tier I spending for student cultural organizations and RSOs, a reallocation of merit and need-based scholarships to 25 percent and 75 percent, respectively, and a public letter of support for Pell Grant reform.

Subbaswamy promised to observe their demands and come back with a set of proposals by the end of the semester. This draft will be made available to students for feedback before it is finalized.

The Diversity and Strategic Planning Steering Committee will be meeting every week for the remainder of the semester.

Nicole Dotzenrod can be reached at [email protected]

Correction: A previous version of this story misreported CEPA’s demands. The error has been corrected above.