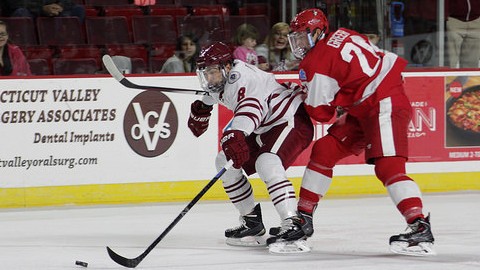 In his postgame press conference Friday night, Massachusetts hockey coach John Micheletto stressed the importance of momentum in a matchup between two young teams in UMass and No. 20 Boston University.

“Momentum was going to play a big factor,” Micheletto said. “How quickly you could wrestle that momentum back and ride the waves when it’s going your way and keeping your head above water when it’s not was going to dictate what was going to happen tonight.”

After the Terriers scored six unanswered goals in the final period in an 8-1 victory at Mullins Center, it was clear that this momentum did not favor the Minutemen.

One minute, 54 seconds into the third period, Jack Eichel started BU’s offensive breakthrough, bringing the Terriers’ lead to 3-1 on slapshot between the circles. Less than a minute later, Danny O’Regan converted on a pass from Eichel to further extend the lead.

According to Micheletto, these breakdowns on defense stemmed from allowing too many high-quality shots despite having defenders in position.

“Unfortunately, on most of the rush goals that they scored, we had numbers in the area,” Micheletto said. “Responsibilities got clouded and decisions weren’t made that should have been made and that exposed the flat pass that they took advantage of.”

After failing to reach the score sheet in the first two periods, Eichel and O’Regan both finished with two goals and an assist playing on BU’s first line together.

“They had chances in the first two (periods),” Terriers coach David Quinn said. “And then all of a sudden, it was like they took the game into their own hands.”

For Eichel, a freshman, Friday’s three-point performance came in his first collegiate game.

UMass scored its lone goal with 47 seconds remaining in the second period. Freshman defenseman Jake Horton capitalized on a pass from Zack LaRue to beat freshman BU goaltender Connor LaCouvee. The score made it a 2-1 Terriers’ lead at the end of two periods.

“That goal they scored was an NHL goal,” Quinn said. “There’s not a goalie around that would’ve stopped that.”

Aside from Horton’s goal, the Minutemen struggled to find consistent scoring opportunities against LaCouvee and BU’s defensive front.

LaCouvee, who found out he was making his first collegiate start Friday afternoon according to Quinn, finished with 31 saves. The freshman started in place of junior Matt O’Connor, who suffered a minor injury in practice on Thursday.

Quinn said that he was impressed with LaCouvee’s composure especially in the third period once the Terriers started playing “sloppy” after taking a 5-1 lead.

In particular, UMass’ starting line combination of Frank Vatrano, Dennis Kravchenko and Troy Power failed to capitalize against the Terriers following the line’s combined five points in the team’s exhibition matchup against Dalhousie on Oct. 4.

“We didn’t elevate our game coming off of the exhibition,” Micheletto said. “The lesson that should be pretty clear to our guys is that the level of play in the Hockey East is better than anything else they’ll see. If that wasn’t made readily clear to them in advance of tonight’s game, it should be at this point.”

The Minutemen will now prepare for a six-game road trip that begins on Oct. 17 at Michigan State where UMass will play the Spartans on back-to-back days. The Minutemen do not return to Mullins Center until Nov. 7 against American International.

“I don’t think we’re anywhere near to being a finished product,” Micheletto said. “Certainly I don’t think that what we revealed tonight is going to be who we are by Thanksgiving.”