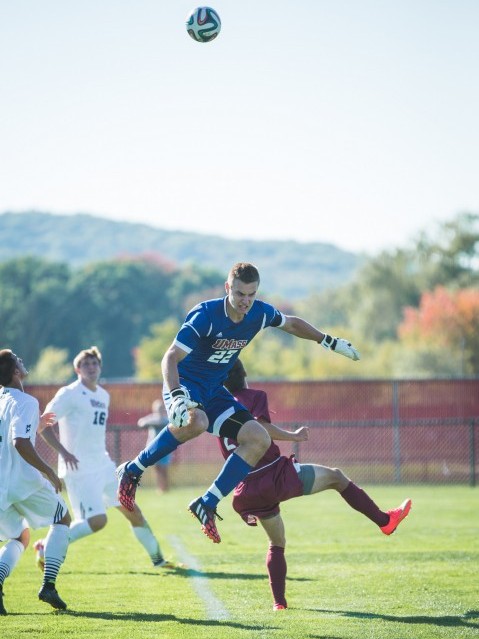 The game was a tale of two halves for the Massachusetts men’s soccer team.

The Minutemen (1-9) came out strong controlling the ball and putting pressure against the Hartford Hawks (5-4-2) defense and redshirt freshman goalie Scott McKirgan.

But Hartford’s Romario Jones put all that work to a crashing halt when he scored the game-winning goal in the 94th minute, securing a 2-1 win for the Hawks.

“I am really proud of the way my team played,” O’Neill said. “We’ve played well, not just hard these past few games. We have been in every game we played recently, so that is a good sign moving forward.”

Four minutes into overtime, Hartford forward Jeff Tyron took a shot that was blocked by UMass goalkeeper Ryan Buckingham. The ball then rolled back into the box where Jones got a foot on it that ended the contest, giving the Minutemen their fourth consecutive loss, all of which by one goal.

UMass was the first team on the scoreboard when midfielder Luke Pavone put a hard shot past McKirgan in the 34th minute to put the Minutemen up 1-0 late in the first half.

“I thought we competed very well in the first half,” interim head coach Devin O’Neill said. “We had many second balls and when we won the ball we transitioned well.”

“Luke had a great game for us today,” said O’Neill.  “He got out and spaced the field and helped us transition well. It really helped us get a rhythm in this game.”

Unfortunately Payone’s goal would be the only one UMass had in Wednesday’s game. McKirgan stopped almost everything that the Minutemen put on him. The game could have been well out of hand going into halftime, but it was McKirgan’s performance that kept the Hawks in the game.

McKirgan faced 22 shots from the Minutemen offense, 10 of which were on goal, yet he only let one past him. Meanwhile, his team didn’t help him out, not putting a single shot on Buckingham in the first half.

“Our finishing needs to be a little sharper,” O’Neill said, “If we are able to finish those scoring chances, we would have won this game.”

Coming out of the half, there was a sense of urgency from the Hawks, who for the most part were pushed around in the first half by UMass defenders. The team had clear control of the ball and made much crisper passes and it was leading to better chances.

It wasn’t until the 55th minute that the Hawks put their first shot on goal. One minute later Hartford would even up the game with a goal by Romario Jones that was assisted by Omar Tall.

“A bunch of the credit has to be given to Hartford in that second half,” O’Neill said. “They got off to a great start in the half and they controlled the ball a lot better than we did.”

As the half progressed, both teams had plenty of chances to take the lead.. Late shot attempts by the Minutemen, most notably by freshman Matt Mooney who hit the left goal post in the 83rd minute, which would have given UMass the lead.

The Hawks had  a great chance from Udi Cohen in the 87th minute that went just wide of the Minutemen goal post would have ended the game in regulation.

“I think we are playing quite well right now,” O Neill said. “Hartford is a really good team so being able to compete with them is a very good sign for our program.”

UMass will look for its second win again on Saturday as it takes on Virginia Commonwealth University at Rudd Field at 1 p.m.