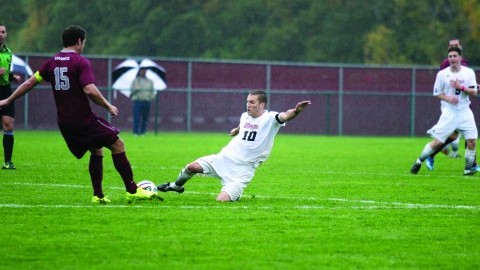 A single goal in a loss doesn’t give much comfort to frustrated fans that are tired of seeing their teams lose. A single goal doesn’t mean much for the statistician that glosses over box scores every morning looking for something out of the ordinary to make him or her nod in approval. However, the problem with even the most diligent consumers of quantitative data is that in sports, and specifically soccer, there are certain events that numbers simply fail to capture.
Such a moment occurred when the Massachusetts men’s soccer team took on Hartford University on Oct. 8.
Emily Pavone – the mother of sophomore Luke Pavone – decided to surprise her son by making the six-hour trek from Rochester, New York to Hartford, Connecticut to watch the game. Fittingly, Luke scored his first collegiate goal for the Minutemen, although the team went on to lose its ninth game of the year in a 2-1 overtime loss.
But the goal was not just another tick in a statistics book. Instead, it was a moment that stemmed from years of hard work and mental forbearance that materialized into a moment of relief, pride and joy.
Members of the UMass men’s soccer team, and Pavone in particular, are no strangers to adversity. This summer, the man who had recruited Pavone – Sam Koch, UMass coach for the past 23 seasons – died from sinus cancer. Earlier in the season, Pavone spoke about his relationship with Koch.
“Coach Koch was a great guy,” Pavone said. “We had a great year with him last year and he was not just a coach to me, but a friend as well.”
While the team as a whole mourned the loss of its main leader, Pavone also had to deal with the death of his father, which occurred within the same year.
Pavone said he has made it his goal to honor his father in the best way he knows how: by playing soccer.
“He was my mentor my whole life, and scoring that goal was a something we had talked about for as long as I can remember, so to get that goal for him was really nice,” Pavone said.
Heading into his sophomore campaign, Pavone also had to deal with a physical burden as his freshman season was cut short after he tore his meniscus. Pavone said that the injury was taken care of and he was able to rehabilitate effectively before this season. He thanked his teammates for helping him during the growth process.
“Guys like (senior forward) Josh Schwartz and (senior captain) Matt Keys really helped me get better and improve my own game,” he said.
On the field, Pavone is an exciting player. The right-footed winger possesses a combination of pace and skill, which he uses to get down either side of the field.
“To be honest it doesn’t really matter what side I play on, but this year I am definitely the wide-guy,” Pavone said. “I think that going at guys with speed is what I do best.”
When Pavone is on the left side, he said he likes to cut into the middle, trying to find an angle to shoot, while freeing up the vacated space on the flank for other teammates to move into.
When interim head coach Devin O’Neill described Pavone as a player, he was full of praise.
“(Pavone’s) dynamic and just so competitive, which is what I think makes him so difficult to play against,” O’Neill said.
Pavone’s dynamic abilities were on display when he notched his goal. The move started from a Hawks’ corner kick when Pavone collected the ball outside the UMass 18-yard box, dribbled the length of the field and finished off the attack with a calm side-footed strike from 12 yards out.
The wide man now has three assists and a goal for the season and has drawn two penalties for his team. In addition to being one of the most dangerous attacking threats on the team, Pavone also makes sure to do his defensive duties.
“Offense starts with defense, and defense wins games,” Pavone said. “If you don’t track back and help out then coach won’t let you do anything on the offensive side.”
As UMass (1-9-1, 0-1-1 A-10) looks to turn around its season in conference play, Pavone is expected to help lead the attack on both sides of the ball.
“We’re about as close as you can be to winning games,” Pavone said. “We have a young team, but we’re going to keep fighting until the end of the season.”