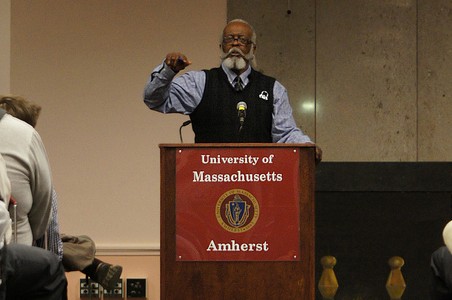 The UMass Republican club isn’t exclusive to Republicans. They pride themselves on welcoming students of all political affiliations to join their weekly meetings held in the Student Union room 413 at 7 p.m. every Monday.

Founded in the 1970s, the UMass Republican Club began as a small group that discussed political issues. Through the efforts of its leaders, the organization has grown to around 25 active members and has hosted several famous speakers in the past few years.

Current president David Kaufman says that the club was not always as big as it is now. When Kaufman was a freshman three years ago, the club only had seven students and even lacked a secretary.

When none of his peers stepped up to the plate for leadership positions, Kaufman ran for president at the end of his freshman year and has maintained the position for three years.

Each meeting opens up with a discussion on domestic and global current affairs, events that have happened in the week, opportunities for club members in the political field and plans for future events.

The club offers members many opportunities, including working on different political campaigns. In the last election, the group focused on Scott Brown’s and Linda McMahon’s campaigns, and more recently, a few members have been working on Charlie Baker’s race for governor.

Kaufman is hopeful that UMass Republicans will be able to host two events this year – a small event in the fall, followed by a larger event in the spring. The club has tentative plans for speakers such as author Ben Carson, former Virginia Rep. Eric Cantor, former Florida Rep. Allen West and Supreme Court Justice Antonin Scalia.

In the past, the club has hosted former Attorney General John Ashcroft, former Speaker of the House Newt Gingrich and commentator Ann Coulter.

One goal that Kaufman has in mind is to promote a pro-woman and pro-minority agenda.

“We want to change our image on how people view the Republican party, specifically how our club is viewed, and would like to show others that it is inclusive as well,” he said.

Kaufman explained that he wants to ensure that others see the club not just as a Republican club for Republicans, but a club for anyone to join. While the club brings its conservative ideals to campus, Kaufman said that the club is not defined by just Republican values.

“We have fairly liberal stances on some social issues, but they vary for each person,” he said.

Under the leadership of Kaufman, the organization hopes to break the stigma carried by the more conservative wing of the party. He intends to accomplish this by opening the club up to more critical discussion on all topics, rather than just those of his party’s own platform.