UMass system jumps 41 spots in rankings, making it number 91 in the world 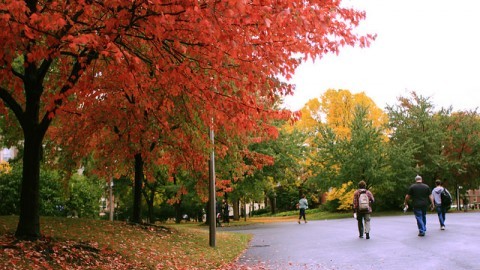 This year’s improvement shows the reversal of a downward trend in the rankings for the UMass system over recent years. Between 2010 and 2011, UMass was No. 56 in the world, but competition and improvements in higher education across the globe sent the system into a decline.

Teaching, research and citations each take up 30 percent of the overall score, while industry income assumes 2.5 percent and international outlook takes up 7.5 percent. Data is provided and signed off on by the respective institutions. In order to be considered for a ranking, a university must publish at least 200 research articles a year.

THE gives each eligible university an overall score averaged from the five categories. According to a statement on THE’s website from ranking editor Philip Baty, these rankings provide a comprehensive and detailed insight to assist students in selecting a potential school to attend.

The UMass system received an overall score of 56.1, tying with the University of Pittsburgh for 91st place. THE’s rankings encompass all five campuses of the UMass system.

Its highest score came in the category of citations, considered by THE as the most influential of the score indicators. Citations are examined by the number of times a university’s published work is cited globally. Higher frequency of citation for a university’s research demonstrates its contribution to the sum of human knowledge, according to THE’s website.

The UMass system has seen the most significant scoring declines in teaching and research. Since 2011, both categorical scores dropped over 20 points. The scores are largely determined by an invitation-only opinion survey of 10,000 people that judges the excellence and prestige of a university’s research and faculty.

However, this year’s rankings show improvement in all five categorical scores. The decline in scores does not necessarily demonstrate a decline in quality, as 93 percent of faculty hold the highest degree in their respective fields at UMass. Research associated with UMass has also been credited with billions of dollars of economic activity in the past decade, according to a report by the Isenberg School of Management.

The fluctuation in rankings can be attributed to increased competition across the globe. Europe is still America’s main rival in public higher education, but Asia saw four more of its universities included in the top 200 this year, and now has 24 compared to 74 American institutions.

According to a UMass system press release, this makes the 41-place advancement all the more impressive.

“This accomplishment is perhaps made more impressive by the fact that the University of Massachusetts has risen further up the table this year against a backdrop of falls for many of the USA’s universities, and against mounting competition from rising stars in East Asia which have been enjoying strong financial support,” Baty told The University.

According to a press release from UMass, THE’s World Ranking system is considered to be one of the most influential and authoritative international ranking systems of higher education institutions.

“The rankings are higher education’s gold standard, they’re the most prestigious rankings in the world,” Scales said. “They motivate us to continue in our wide-ranging research and improve all areas of the education we provide.”

“Along with encouraging us to continually improve, these rankings are an affirmation of the quality of education the UMass system provides,” she continued. “UMass seeks to be the best university it can be and these rankings demonstrate this goal and qualify our efforts to get there.”

“Massachusetts is a leader in education, and its public research university is recognized as a leader in higher education worldwide,” UMass Board of Trustees Chairman Henry M. Thomas III said in a UMass system press release. “We are grateful for this recognition of our achievements and the commitment we make to progress each and every year.”