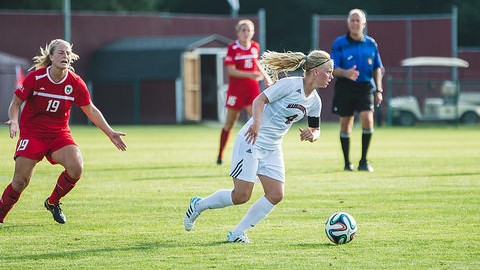 The Massachusetts women’s soccer team left the nation’s capital with lingering frustration Friday after falling to George Washington University, 2-1. It was the first Atlantic 10 loss for a Minutewomen team that had their fair share of chances throughout the match.

Sophomore midfielder Daniela Alvarez provided the only goal for the Minutewomen in the 60th minute, corralling a corner kick sent in by Alyssa Fratarcangeli and punching it in to cut the 2-0 deficit in half. It was Alvarez’ first goal of the season, but it was not enough to offset two first half goals from the Colonials (8-3-1, 1-1-1 A-10).

The first goal of the match came only eight minutes in, courtesy of GW’s Mackenzie Cowley, who then assisted her teammate Lina Proska as well in the 17th minute, putting the Minutewomen in an early two-goal hole.

“We were disappointed,” UMass coach Ed Matz said after the match. “We had a good game plan going into today’s game. We basically knew how GW was going to attack us and we were disappointed because through the first twenty minutes they were able to execute their game plan.”

The slow start was too much to recover from, especially against the Colonials who have not lost a match at home all year. They boast an impressive 0.83 goals allowed per match average and entered the day looking for their first conference win.

“GW is a very difficult place to play” Matz said. “They start six seniors, we start one. And it’s difficult to play a team when their back is against the wall…We just gotta make sure that we don’t take twenty minutes to realize that we gotta play better.”

After those first twenty minutes, the Minutewomen were clearly the better team. Defensively, they shut down the Colonials in the second half and out-shot their opponents 13-9 on the day, but they struggled to capitalize in front of the net. Co-Captain Rebekka Sverrisdottir helped the UMass defense right the ship after the first twenty minutes.

“We didn’t make any adjustments at halftime,” Matz said. “They weren’t doing anything we didn’t practice for during the week…Rebekka played extremely well today. She had a very good game.”

The Minutewomen head to Kingston, Rhode Island. to face the University of Rhode Island on Saturday, Oct. 18 and Matz and his team are certainly not satisfied heading into another tough match-up.

“We had an opportunity today to separate ourselves from the A-10, had a chance to make our lives easier down the stretch” Matz said. “It’s gonna be dogfight every single game from here on out… [Rhode Island] is having an exceptional year. They didn’t make the A-10 playoffs last year so they have a lot of incentives…We’ve gotta be ready for all the intensity that Rhode Island is going to bring.”

The Minutewomen have a full week of training before their match against Rhode Island, another team that has allowed less than a goal per match this season. UMass will have to overcome its scoring woes while co-captain and offensive catalyst Jackie Bruno plays limited minutes with an injury in order to come away with at least one point.