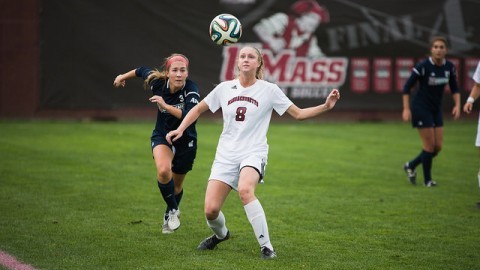 Coming into Friday’s match against St. Bonaventure, the Massachusetts women’s soccer team had scored just four goals in its previous eight matches. But against the Bonnies and Duquesne University on Sunday, in their last two home games of the season, UMass matched that total, winning both games 2-0.

The Minutewomen played like a legitimate postseason threat and not just a team battling for a final Atlantic 10 playoff spot. The consecutive shutout victories marked UMass’ first winning streak all year, bumping its record to 5-7-4 with a 3-2-1 conference mark. With late season pressure mounting, coach Ed Matz was understandably pleased with the weekend.

“It was rewarding for a couple reasons” Matz said. “Number one, we’re playing against teams that we’re competing with for the final spots in A10 tournament … there was a lot at stake for both teams.”

At this point in the season, each match-up pits conference rivals against each other, and so far the Minutewomen have taken full advantage. After being outside of the playoff picture before the weekend, UMass vaulted into sixth place, while the Dukes and the Bonnies saw their postseason hopes evaporate, falling to eleventh and twelfth, respectively. Only the top eight teams will travel to Dayton for the Atlantic 10 Conference Tournament.

“Dani had a good weekend for us” Matz said. “She did a very good job of communicating, organizing our backs…She doesn’t give up any rebounds. We know there’s not gonna be any second chance opportunities.”

Matz also praised Kriscenski’s attitude, something he says gets more important as the team gets into more high stake matches.

“She plays with a bit of an edge, a little bit of toughness.”

Leading the jump in offensive production has been co-captain forward Jackie Bruno. In just six October matches, Bruno has scored four goals, with several of them coming in the clutch. Two of those four were game-winners and another earned UMass a tie.

“One of the big things we did was move Jackie from outside forward to center forward … to get her in front of the goal more.” Matz said.

Giving Bruno opportunities to make plays has been something the Minutewomen have struggled with this season, but clearly things are starting to click. With how great of an impact Bruno has made this year for UMass, it is easy to forget that she has already more than doubled her career goal total. Before this season, her junior year, Bruno had just five collegiate goals to her name. This year alone she has six.

However, Bruno is not the only one stepping up her game as the regular season comes to close. True freshman Natalie Perussault had a standout performance against Duquesne, registering her first three collegiate points with a goal and assist. It was only a matter of time for the young forward who has been a critical part of the Minutewomen offense this year and is fifth on the team in shots (22).

Sophomore Alyssa Fratarcangeli also scored her first collegiate goal over the weekend, ripping a shot into the lower right corner against St. Bonaventure.

“It was good to see Natalie get a goal this weekend” Matz said. “She’s been working really hard … Also Alyssa got her first goal … Those were two girls that weren’t looking for their shot as much. We worked on that in practice and it translated into the matches.”

With just two matches left in the regular season, the Minutewomen are clinging to their middle-of-the-pack playoff spot, but with only a few points separating the majority of the A-10 teams, cannot afford any slip-ups. First, UMass will have to endure the University of Richmond’s powerful offensive attack. The Spiders’ will undoubtedly come out with intensity with their season on the line; they currently sit just out of the postseason in the number nine spot. After that, the Minutewomen will have an easier match-up – on paper, at least – against last place Davidson.

But if Matz and Co. have it their way, UMass will secure a playoff spot before they roll into North Carolina on Sunday.