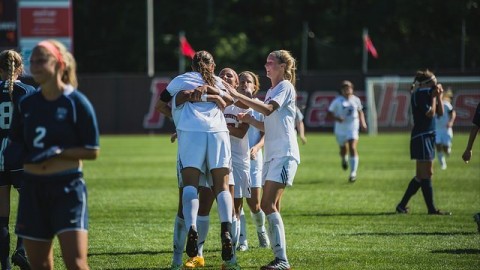 The Massachusetts women’s soccer team’s match against Harvard University on Monday was a microcosm of its season up to this point: rock-solid defense and double overtime. The Minutewomen grinded out a 0-0 draw, ending a three-game winning-streak for the Crimson, who outscored their opponents 9-0 during that stretch.

Although another double overtime match in which UMass (2-5-3) failed to score does not sound like an ideal scenario heading into Atlantic 10 Conference competition, Coach Ed Matz was extremely pleased with the team’s performance.

“I couldn’t be more proud of the way our team played,” said Matz in a press release. “We came out against a very talented Harvard team and I was very pleased with how our players followed the game plan.”

Stifling a potent Harvard offense on the road has the Minutewomen’s defense back on track after suffering consecutive multiple-goal losses to the University of Connecticut and Brown University. With some much needed momentum, UMass looks poised for their first Atlantic-10 Conference match-up of the season against George Mason University on Friday.

The beginning of conference play usually presents teams with familiar opponents, but Friday’s match will mark the first time that the Minutewomen have ever played George Mason in women’s soccer, considering the Patriots only joined the A-10 last year.

On paper, it appears to be a promising match-up for UMass as George Mason has struggled this year going 2-0-7 in non-conference play this year. Both teams have also shared similar struggles on offense with each only have six total goals this season.

The Patriots offense features a more balanced attack as all six of their goals have come from six different players, none of whom have any assists either. Midfielder Emma Starr leads George Mason with 13 shots on goal, following closely is forward with 12. In contrast, Jackie Bruno leads the Minutewomen with 24 shots, however the forward has not played in a game since Sept. 14 with a bone abnormality in her right foot.

UMass has been markedly stronger defensively allowing just 1.4 goals per game as opposed to 1.89 for George Mason. The Minutewomen have allowed opponents to shoot on goal 121 times this season as opposed to the Patriots 108.

At this point, it is wishful thinking to expect anything but a defensive battle from UMass, so securing the first goal will be paramount; however, if neither team is able to break the tie in regulation, the Minutewomen’s lengthy overtime experience this season may come in handy. George Mason has only played in one overtime match this year, a 1-0 loss to William & Mary on Aug. 24.

The match against George Mason starts at 4 p.m. at Rudd Field. The Minutewomen will host Saint Joseph’s University on Sunday at 1 p.m.