Underclassmen lead UMass hockey to first victory of the season 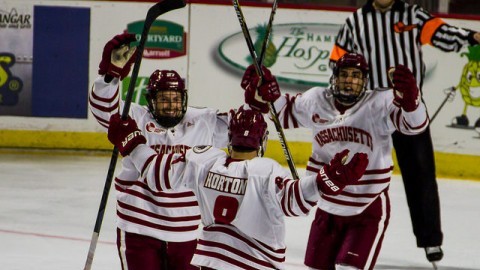 As the clock continued to wind down in the third period, it seemed that the Massachusetts hockey team was heading toward its first overtime game of the season.

With three minutes, 49 seconds left in a 3-3 game, the Minutemen went on the power play after Michigan State redshirt junior Justin Hoomaian was guilty of a five-minute major and a game misconduct.
Enter freshman forward Patrick Lee.

With 9.9 seconds left in regulation, Lee found the back of the net for his first collegiate goal to give UMass the 4-3 victory and a weekend split against the Spartans.

After the game, UMass coach John Micheletto praised Lee for his efforts, as well as his linemates, sophomores Steven Iacobellis and Ray Pigozzi. The trio of underclassmen contributed 10 points in the victory, responsible for three of the goals and combining for seven assists.

“They certainly weren’t as productive on (Friday) night, but I think it’s a product of them starting to mesh together and get to know each other,” Micheletto said. “They clearly had their A-game going. They’re gonna be a big part of our game this year so we need big nights like these.”

After giving up a goal 52 seconds into the third period to give Michigan State a 3-2 lead, the Minutemen (1-2, 0-1 Hockey East), continued to fight and were rewarded for their resilience when Iacobellis scored his second goal of the night to tie the score at three apiece with under five minutes to play.

Freshman Jake Horton also recorded his second goal of the season for UMass, while senior forward Matt Berry led the way for the Spartans (1-1) with two goals.

Despite losing Friday night, Micheletto applauded his team for responding the next night.

“With the exception of the first period on Friday night, we played a pretty good brand of hockey,” he said. “I don’t know if it was the road trip or Michigan State jumping on us pretty early or a combination of the two, but from there on out I was really happy with the continued progress that we’re making as a team and gelling together in the early going.”

The game also marked freshman goaltender Henry Dill’s first career win in net for the Minutemen, with Steve Mastalerz being given the night off. Micheletto commended the freshman, who made 28 saves, for his efforts.

“He was very solid. During the recruiting process he really impressed us with how rarely he gets rattled, which is always great,” Micheletto said. “He made some big saves for us in the first period and really put some wind in our sails. He was a big part of our victory.”

Micheletto said he will be using this week to evaluate the goalies in practice and would make a decision on who will be starting for UMass on Thursday prior to heading to Northeastern for a Hockey East showdown on Friday night.

The Spartans scored three unanswered goals to break a 2-2 tie and defeat the Minutemen 5-3 on Friday night in the opener of a weekend series in East Lansing, Michigan.

A two-goal performance from freshman Keith Burchett was not enough for UMass, who also received a shorthanded goal from senior Zack LaRue. Junior Shane Walsh and sophomore Brennan Baxandall each recorded two assists for the Minutemen.

UMass continued to struggle on the power play over the weekend, finishing 1-for-7 on the man advantage. Micheletto said he would like to see this improve moving forward and thinks it will come with practice and increased opportunities.

“We’re still not a finished product by any means,” he said. “I think we’ve taken significant steps in the games we’ve played and hope Friday night will be different.

“Our power play needs to be a little bit more productive, but that’s just a matter of repetition with our guys. We’ll just keep trying to get better and prepare for Friday.”