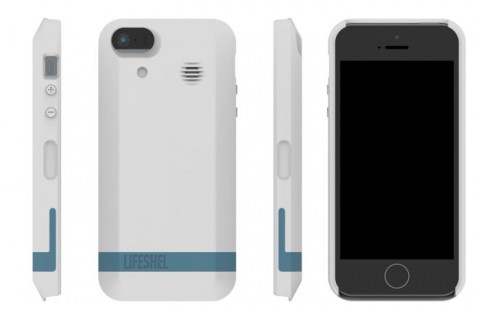 With all of the apps for phones alerting friends and family if you are in danger, one may think that is the extent companies can go in terms of safety features. Until now.

Whistl, an iPhone case intended to prevent and deter sexual assault, crime and violence through three different types of alert systems, is looking to take safety a step further. The case is available for the iPhone 5, 5s and 6.

Acting in the place of a phone app, whistle or pepper spray, Whistl is a phone case that easily allows the user to contact their family and friends, notify the police or set off an alarm depending on which mode is chosen.

The first mode is “check-in mode,” which alerts family and friends of any danger by sending a pre-made message and GPS coordinates of the user’s location. The phone will check with the user after five minutes to see if the user is still in danger. If the user does not respond to the check in, the police are automatically notified.

The second mode is “panic mode,” which alerts friends and family, sounds an alarm, flashes a light and alerts police within 15 seconds of it being activated. The sound of the alarm is designed to be as loud as the front row of a rock concert.

The third mode is “stealth mode,” which silently contacts the police within 15 seconds and notifies family and friends.

“It’s an amazing idea, it’s hard to dial 911 in some situations without alerting your attacker and a phone case that not only disorients the aggressor, but also notifies the police and the people nearby who’d be most willing to help is great,” said Caroline Meade, a senior communication major.

Paired with the Whistl app, which does not have to be opened in order for it to be used, a message that is pre-made by the user will be sent to family and friends, a location tracker will turned on and an automatic video and audio recording will be turned on for evidence as well.

A group of engineers at Carnegie Mellon University were motivated to create this phone case and app combo to combat sexual assault. Together, they founded the LifeShel team and created their first product: the Whistl.

The LifeShel team has thought of precautions, so the buttons were included. Both buttons on the side are touch buttons that must be pressed at the same time. Because they are touch buttons, they cannot be set off while in a pocket or a bag. If it still somehow manages to go off, the user has 15 seconds to disable it by entering their security code in the app.

With over 200 backers and a little less than two weeks left, Whistl has already reached over $42,000 out of their $70,000 goal. Any phone cases that are pre-ordered through Kickstarter can be bought for $57. Estimated delivery time of the phone cases is July 2015.