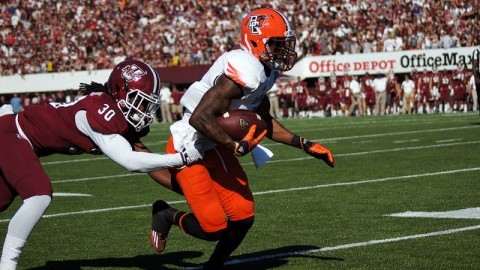 Using a bruising running attack, Western Michigan wore down Bowling Green on its way to a 26-14 victory over the Falcons on Saturday afternoon.

The Broncos (4-3, 2-1 Mid-American Conference) relied heavily on freshman running back Jarvion Franklin, who was a workhorse for the team. He carried the ball 37 times for 149 yards to go along with one touchdown. As a whole, the team ran the ball 50 times for 195 yards, averaging 3.9 yards per attempt.

Bowling Green (5-3, 3-1 MAC) opened the game with a touchdown drive (capped off by a 2-yard scoring run by Andre Givens), but would struggle to keep the scoring going as it was held to its lowest point total of the season. The offense failed to produce with any consistency, gaining only 274 yards, far short of its season average of 454.8.

On the first drive of the second half, a long touchdown pass from quarterback Zach Terrell to receiver Darius Philips gave Western Michigan a 19-14 lead. The Broncos would extend their lead to 26-14 in the fourth quarter, and possessed the ball for 13 of the last 15 minutes on their way to victory.

Western Michigan will move on to a matchup with Ohio on Saturday at 2 p.m., while Bowling Green has a bye week and returns to action Nov. 4 against Akron.

Akron’s three-game winning streak came to an end in devastating fashion Saturday afternoon, when the Zips fell to Ohio 23-20. It was a back and forth game between in-state rivals, but ultimately, late mistakes by Akron (4-3, 2-1 MAC) proved to be consequential.

With the game tied 20-20 late in the fourth quarter, Zips receiver Andrew Pratt fumbled the football away to Bobcats linebacker Javon Johnson with less than four minutes remaining. Ohio (4-4, 2-2 MAC) would capitalize with a field goal to take a 23-0 lead with 1:55 to go in the game.

Akron got the ball back for one last drive, but stalled out at the 50-yard line when quarterback Tommy Woodson was intercepted by Bobcats safety Josh Kristoff, sealing the victory for Ohio.

The Bobcats set the tone early behind the arm and legs of sophomore quarterback J.D. Sprague. He passed for 197 yards and two touchdowns with one interception, and gained 68 more yards on the ground. Ohio struck early with a 49-yard touchdown pass from Sprague to receiver Ian Dixon on the opening drive of the game.

However, Akron would not go away quietly. Zach D’Orazio caught a 13-yard touchdown pass from Woodson in the third quarter to put the Zips ahead 17-13, but in the end the lead would not hold up.

Akron will look to rebound next week against Ball State, and Ohio will try to keep its momentum going against Western Michigan.

After losing two of its last three games, Northern Illinois bounced back in a big way by scoring 51 points – its highest total since week one – on the way to a 51-41 victory over Miami (Ohio).

The Huskies (5-2, 2-1 MAC) offense clicked right from the start, and a 6-yard touchdown run from Jordan Huff put them on the board to complete their opening drive. Northern Illinois would score on their first six possessions of the game (including five touchdowns) to take a 37-21 lead at the half.

The Miami (1-7, 1-3 MAC) defense had no answer for Huskies quarterback Drew Hare, who turned in an incredible performance. He had 17 rushes for 180 yards and two touchdowns to go along with 185 yards passing and a touchdown. The offense gained a total of 658 yards, with 433 of them on the ground (both season highs).

The Red Hawks offense kept it interesting, scoring midway through the third quarter with a 4-yard touchdown run by Andrew Hendrix to pull within nine points. Hendrix also had an explosive day (346 yards passing and 72 rushing yards for five total touchdowns), but his efforts were not enough for Miami to keep pace with Northern Illinois.

The Huskies will hope to have similar offensive success as they face Eastern Michigan on Saturday, and Miami will look to bounce back against Kent State.