#WrongDoor: Why am I not surprised? 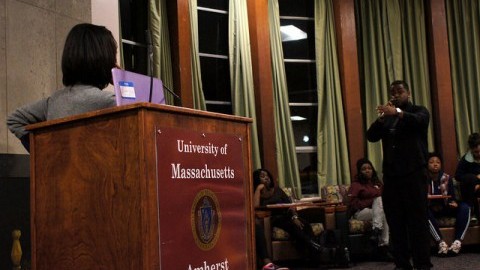 In response to the racist threats made over Columbus Day weekend, many students and faculty at the University of Massachusetts expressed shock. Many found it hard to believe that such language would still be used in 2014. I was not. I did not deal with one incident of racism at this University perpetrated by one individual – I dealt with an entire class and a teacher leading their charge. The lecturer and students in this class will remain unnamed throughout, the teacher being referred to by the pronoun “he.”

Last fall, I was in the Honors course “Ideas that Changed the World” for a short time before transferring to a different section. Throughout my stay in the class, there were many incidents that were subtly offensive and showed a lack of understanding of others. The teacher would do things such as state that it is absurd to believe that there is any racial grounding behind a woman holding onto her purse tighter upon a black male entering an elevator with her. On an almost daily basis, the entire class would take turns shooting down the experiences of the only other student of color in the class. Once, the class discussed how our parents regarded their children’s potential futures. The student of color responded, stating that he wished he were raised in an environment like that instead of an apathetic one. A white student across the room shut him down, dictating that it is just as hard to have people interested in your future and choices as it is to have nobody care. A white Canadian immigrant in the class spoke on how he completely understands the strife of being an immigrant, with all of the harsh political rhetoric so prominent in politics, failing to realize that he is not a part of the group politicians often speak about.

The class lost its subtleness the day we had to watch a video on the portrayal of minorities in the media for homework. The class began with the students praising the video and expressing how little they knew of the negative portrayal of minorities. What started as an educational discussion quickly turned to the students and the teacher discussing how a white male made the video. A student claimed that in some ways, it is better for a white individual to bring attention to racism, as he or she would have a greater affect. The lecturer latched onto the idea, expanding that the student was not only correct, but it is better for a white person to lead these movements. He presented the class with the idea that everyone should be skeptical of any minority claiming to be oppressed because that person may have ulterior motive and would naturally claim to be oppressed. The teacher clarified that with a white whistleblower, there is not such concern and that he or she may be trusted immediately because they could not have an ulterior motive. His statements received no contention – in fact, many of the students agreed with the instructor. I spoke up against the teacher’s statements, believing that white confirmation of oppression is not a necessity. The teacher and several of my classmates vocally disagreed with me. Repeatedly.

After that class I scheduled a meeting with Interim Dean of the Commonwealth Honors College, Daniel Gordon, to bring the incidents to his attention. After our initial meeting, Gordon showed an interest in my experiences in the Honors College and invited me to visit him throughout the year to discuss it. Amongst other topics, our discussions ultimately led to him telling me about a diversity report he was trying to put together on the Honors College. Chancellor Subbaswamy is calling on us to all work together to make this University more welcoming and diverse but we do not have access to all the information. With a residential area just over a year old boasting diversity but several students targeted for their race, something must be done.