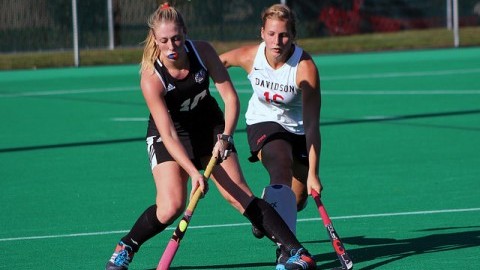 Coming off the heels of back-to-back Atlantic 10 Conference titles, the Massachusetts field hockey team knew expectations would be high as the team sought to add another trophy to the mantle.

But for the Minutewomen, youth and inexperience ultimately held the team back as UMass finished just short of its goal, losing 1-0 to Richmond in the A-10 title game.

The Minutewomen got off to a slow start to this season, winning two of their first nine games. Losing seven of 11 starters from last year’s team and the rigorous nonconference schedule, featuring games against powerhouse schools like Maryland and Connecticut, proved to be too tough for UMass.

Minutewomen coach Carla Tagliente attributed the struggles in the first half of the season to the change in personnel from last season.

“Trying to bridge that and maintain some consistency from the year before is pretty much going to be impossible,” she said.

“You’re not only talking about new players on the field but you’re talking about a new team identity, a new team dynamic, new team leaders. I mean everything is just new and I think it took us some time to find out who we were and where we were going.”

Despite these struggles in early nonconference play, once UMass began its A-10 schedule, it turned over a new leaf. After a loss to Richmond in its first conference game of the season, the Minutewomen ran the table against the remainder of their A-10 counterparts. UMass excelled in the second half of the season, going 8-2 in its final 10 games to finish the season above .500, tallying an 11-10 record and earning the top seed in the A-10 tournament.

Senior Lauren Allymohamed said she was impressed with the team’s ability to finish strong despite the slow start to the season.

“I think it takes a lot for a team to overcome adversity,” Allymohamed said. “To have such a bad first half of the season and then to overcome it took a lot of mental toughness and coming together as a team. (Tagliente) definitely played a huge role in that by keeping us motivated and believing in ourselves. It takes small things to win a game and it was coming together, practicing hard and playing through it even though we had lost so many games.”

One of the standout players for the Minutewomen this year was Melanie Kreusch.

A freshman from Belgium, Kreusch’s specialty in the penalty corner – the team’s most consistent form of offense all season – helped her lead UMass with 10 goals en route to earning A-10 Rookie of the Year honors. Tagliente praised Kreusch’s ability to make an impact in all parts of the game.

“She just has a presence about her,” Tagliente said. “She’s a really good player, period. She has one of the more dangerous drag flicks in the country. It’s rare to have a freshman come in and have the impact she had, really in every facet of the game.”

The Minutewomen earned numerous accolades for their domination of the A-10 in the regular season. Allymohamed, Kreusch and junior goalkeeper Sam Carlino were all selected for the A-10 All-Conference first team, while junior Brooke Sabia, sophomore Izzie Delario and freshman Sarah Hawkshaw made the second team. Kresuch and Hawkshaw also earned All-Rookie team honors.

Although UMass will not be graduating as many seniors as it did last year, the 2015 Minutewomen will be without Allymohamed and Renee Suter, who both started all 21 games this year. UMass will also lose Mariajose Rodriguez who appeared in just nine games due to injury. Allymohamed will be specifically missed, as she was a three-time A-10 defensive player of the year.

Tagliente said she is optimistic about the possibilities of the team returning to its winning ways next season, though there is still work to be done in the offseason.

“The positive going into next year is we don’t have quite the losses as the year before in terms of personnel so we should be able to work with how our team will pretty much look in the fall,” Tagliente said.

“It’s not going to be identical, we’ll have some freshman coming in that will probably play significant minutes and start, but I think we can work on more defensive stuff and more structural stuff. There is a huge, huge individual skill element and a huge fitness component to the offseason. Basically the main thing will be a lot of collective growing together and skill-building.