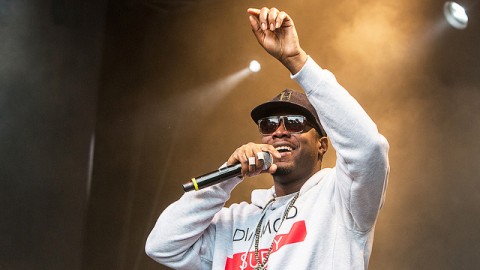 Somewhere between gangster rap and soul music lies Big K.R.I.T., an artist who truly represents the Deep South. The 28-year-old rapper, whose real name is Jamie Scott, sticks to his Mississippi roots on his sophomore LP, “Cadillactica,” released Nov. 10.

At first glance, I was struck by the name of the album, as it sounded like something from outer space. Sure enough, in an interview with XXL magazine, Scott explained, “It’s creating this planet called Cadillactica where the soul and the funk comes from and being able to transcend my music with that idea.” Throughout the album, this idea becomes clear, beginning with the intro track, “Kreation,” during which listeners are transported to this universe through a mix of trap drums and synthesizers.

The production on about half of the album’s tracks airs on the side of hectic, with layers upon layers of unique beats that create a fast-paced flow for Scott. Gangster rap makes a comeback on the album, with tracks such as “My Sub Pt. 3 (Bang Bang),” “Mo Better Cool” and “King of the South.”

The title track brings listeners on a ride into the Deep South, a different universe of sorts, while simultaneously keeping up Scott’s gangster persona with raps about women, cars and guns. His lyrical content leaves something to be desired, but Scott’s mastery of flow is undeniable.

Scott truly brings out his southern soul on the track “Soul Food,” which features Raphael Saadiq. The funk rings out loud and clear, as Saadiq croons underneath Scott’s thoughtful lyrics, which find him addressing the meaning of family and love in life. The simplistic beat allows Scott to shine on his own accord, without being muffled by the excessive trap drums that occasionally permeate his sound. “Pay Attention” has the same sort of give-and-take relationship as “Soul Food,” with a more rhythm and blues-esque vibe, courtesy of Rico Love.

Scott shares the track “Mind Control” with veteran E-40 and Wiz Khalifa. E-40’s pimp-speak complements Scott’s grimy street flow, all to the tune of spacey synths and reverberating horns. There is a lot going on in this piece, which shows both Scott’s growth and his willingness to experiment as he gets more confident with his place in the realm of the rap genre.

The horns return on “Standby (Interlude),” which could have been a strong standalone piece had Scott taken the time to expand upon it, but it stands instead as an interesting interlude. That jazzy sound continues on “Angels,” which features a flow that seems closer to a spoken word piece than anything else. This constant changing of flow and rhythm allows Scott to keep listeners on their toes and entertained as he jumps around the board trying new sounds, all of which seem to work for him.

“Saturdays = Celebration” is a standout track, one that could have easily made for an effective closer. The song’s simple piano introduction segues into powerful rhymes about Scott’s dreams of success. Choral vocals add to the intensity, creating an almost overwhelming sense of determination and power last seen in the likes of Kanye West’s “Jesus Walks.” This section of the album is the lyrical pinnacle for “Cadillactica,” as it also features “Lost Generation,” another example of Scott’s growing lyrical prowess.

Scott seems to be comfortable in any number of situations on “Cadillactica.”

Whether it is being baptized by E-40’s classic southern style or going to church and finding the same level of inspiration, Scott sounds solid throughout.

“Cadillactica” has room to grow, however, with a few weaker tracks during which Scott seems to get lost in the beat, struggling to let his vocals surface. When he does find the surface however, he rides the wave until the very end and fills out the rest of the album with an impressive resume of tracks.

Throughout the album, Scott also manages to stay true to his southern roots. Scott is really beginning to make a name for himself among the elites of rap and if he keeps in this direction, it is only a matter of time before he becomes a household name.