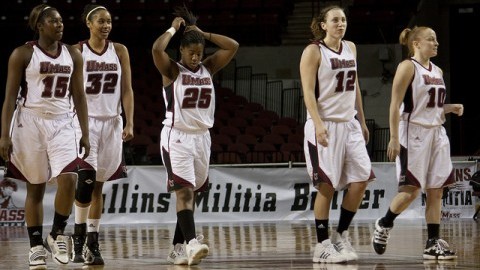 Despite losing its first two games of the season, the Massachusetts women’s basketball team can find plenty of positives between the lines.

UMass was unable to hold onto the lead however, as the Broncos stormed back to rout the Minutewomen, 63-41.

Against Central Michigan two nights later, Timbilla continued her impressive play, recording a double-double with 14 points and 12 rebounds to go along with seven steals and five assists. UMass’ freshmen also combined for 30 points behind Cierra Dillard’s 16 as the Minutewomen almost came back to upset the MAC favorites, before falling short, 72-70.

Despite these positive individual performances, as both the younger members of the roster and the veteran players had impressive games for UMass, the Minutewomen failed to head back to campus with a victory in their opening weekend largely due to issues in fundamentals.

There was some improvement Sunday against the Chippewas, as the Minutewomen recorded a respectable 43.6 percent from the field and 30.8 percent from beyond the arc, but UMass once again struggled from the free throw line (62.1 percent) and in committing turnovers (19).

Even with an impressive defensive performance and a successful late-game full court press that created 20 turnovers against CMU, points left at the free throw line and limiting turnovers remain an issue for the Minutewomen moving forward.

In both contests, UMass held the advantage in getting to the free throw line, a nod to its physical play and ability to get the ball into the paint. But despite holding an advantage in free throw attempts against the Broncos (13-8), The Minutewomen only converted on seven attempts, while the Broncos were 7-of-8 on the night.

Against the Chippewas, UMass more than doubled its trips to the line with 29 attempts compared to CMU’s 17. But the Minutewomen were only able to get 18 points off their attempts, while the Chippewas were slightly more efficient at the line (11-of-17) in a game that was decided by two points.

UMass will return to action in its home opener against Maine (1-1) Wednesday at 7 p.m.