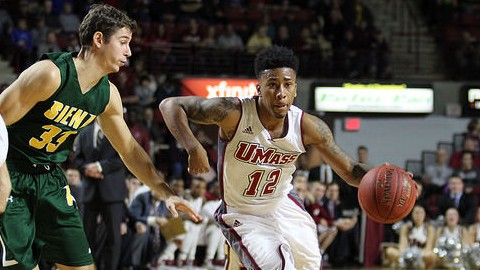 As the Massachusetts men’s basketball team entered its 2014-15 season, coach Derek Kellogg wasn’t certain how a number of new additions to the UMass roster would mesh, and wasn’t sure how his rotational minutes would unfold.

After the Minutemen’s 95-87 victory over Siena, most, if not all, of those questions remain.

But the season-opening victory over the Saints served as an important reminder: What UMass returned from a season ago has the ability to take over a game, and carry UMass to a victory.

Trey Davis, Derrick Gordon, Maxie Esho and Cady Lalanne combined to score 81 of UMass’ 95 points Friday night, shouldering a sizable load both offensively and defensively in the second half.

“Those guys played well tonight,” UMass coach Derek Kellogg said. “They’re going to have to carry us until the young guys catch up a little bit.”

Kellogg relied on those four throughout a second half in which Siena pestered the Minutemen. UMass opened up as much as an eight-point lead in the final frame, but the Saints fought back, chipping away throughout the half before pulling even at 83-83 with one minute, 26 seconds remaining.

But the “big four” held it together.

The combination scored 16 of the final 18 points of the game. Led by Davis – who made eight free throws within the final 44 seconds – and Lalanne, who scored all 15 of his points in the second half, the Minutemen iced the game.

Davis led all scorers with 28 points and bookended the game with strong performances to start and finish. He opened his scoring performance minutes into the game with a 3-pointer that Kellogg joked was so deep, it may have been at half court.

He scored 13 of the team’s 36 first-half points, and served as a calming influence in the final minutes from the free throw line.

“I was trying to be aggressive out of the gate,” Davis said. “I wanted to try and see if my shot would fall early, which it did. When that happened, other things opened up for my other teammates. That’s how I want to come out, be aggressive and work it in like that.”

And when Davis went cold during the second half – he didn’t score for nearly 11 minutes – it was Lalanne who picked up the slack.

The 6-foot-10 center played only five minutes in the first half due to foul trouble. But the senior impacted the game both offensively and defensively in the second half, chipping in nine rebounds and four blocks in addition to his 15 points in the final 20 minutes.

Siena coach Jimmy Pastos noted that he felt Lalanne was a force defensively in the second half, and referred to him as a potential second round NBA draft pick.

Sprinkle in Esho’s 21 points and nine rebounds combined with Gordon’s 17 points, nine rebounds, three assists and two steals, and UMass found a winning rotation, something the Minutemen needed to rely on.

Both Esho and Davis were significant contributors last season for UMass as reserves off the bench. According to Kellogg, it was a seamless transition into the starting lineup this year.

“I didn’t think those guys would be much of an issue because of the way they practiced,” Kellogg said. “I was a little nervous for the next group of guys.”

He worked in 11 different players throughout the game, but shortened his rotation considerably in the second half. He said the tempo of the game and UMass’ inability to break it open early – Siena led 41-36 at halftime – disrupted his planned rotations of working in younger players.

“I thought we had a chance to get it going and have it look a certain way but it never really flipped over,” Kellogg said. “I wanted to get all the guys playing time, I’m going to try every game to give everybody a chance to get in there and play.”

On this night, Kellogg’s new additions observed a strong performance from a core group of veterans with NCAA tournament experience. According to Lalanne, it could be the start of a learning experience moving forward.

“The sky is the limit for us as a team,” Lalanne said. “I think everybody has a chance to get in the game and do something, contribute a little bit. Having the young guys getting in slowly, I think we’ll take off from there.”