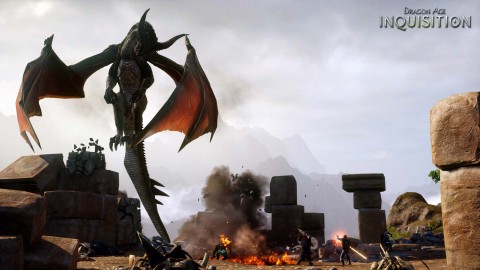 BioWare, the company made famous for its memorable and emotional games such as “Mass Effect” and “Knights of the Old Republic,” released the latest entry in the Dragon Age series last week, “Dragon Age: Inquisition.”

The fantasy role-playing game, or RPG, takes the varied landscape and grand stakes of the first “Dragon Age: Origins” and combines it with the polished mechanics and lively combat of “Dragon Age II.”

The combination creates a truly epic chapter in the Dragon Age series, connecting faces, themes and locations old and new. With well over 60 hours of gameplay, a vast number of hubs to explore and quests to complete, and nine detailed and memorable companions to take with you on your journey, “Inquisition” is the most ambitious and successful game in the Dragon Age franchise.

“Inquisition” starts off in the middle of a disastrous explosion, which wastes no time destroying the peace talks to end a grand war between Mages and their captors, the Templars. The explosion also ripped a hole into the otherworldly Fade known as the Breach, allowing demons to pour out. The game then allows you to customize your character by choosing from four of the world’s races, all of which impact on the way you are treated and the options you are given throughout the story.

Unfortunately, “Inquisition” lacks the opportunity to discover your hero’s past, and instead jumps right into the story, where a mysterious mark on your hand allows you to close the small breaches around the town of Thedas. Needless to say, the plot of saving the world from demons, starting an inquisition to restore order and ending the civil war are the highest stakes we’ve seen in any “Dragon Age” game, but it has a brilliantly crafted story to back it up.

One element BioWare games are most popular for are companion characters. These characters not only serve as allies in combat and discussions with the world’s many characters, but also have stories all their own and can be anything from your rival to your lover. Characters like the helpful and peaceful elven mage, Solas, the childlike mastermind, Sera or the hilarious, hulking Qunari Iron Bull, make up just some of the colorful personalities in the game.

The characters have some of the best and varied Companions yet, all accompanied by beautiful stories and a masterful voice cast. You can recruit to these Companions to join your Inquisition at your base of operations, in addition to your three advisers who serve as pseudo-companions and stay at your base to manage much of the Inquisition’s operations.

The Inquisition’s base, a grand castle in the mountains, serves as an interesting location where you can trade with merchants, bring in rare materials and manage which sub-missions your advisers will go on. While the sub-missions are a bit cumbersome to manage, they add a layer that truly makes you feel like the commander of an army.

The missions and quests are varied and brilliant, taking place in diverse environments ranging from rolling hills to grand palaces. foreign powers, criminal syndicates, Templars driven mad by a mysterious stone known as Red Lyrium, and the hordes of demons make up a repertoire of grand enemies.

Combat is also as polished as ever, combining the strategic choices required to fight tough enemies and the fast-paced action and visually interesting combat that made “Dragon Age II” successful.

Every quest, dialogue, book and enemy is packed with lore and world-building elements that bring the player in and make them care about the world. Returning players of the Dragon Age series will be delighted by the return of old locations and characters, such as the grand Castle Redcliffe or the quick-witted dwarf Varric. New players will also be caught up rather quickly, but will miss out on a few surprises for old fans that make the game that much better.

Expert voice acting, gorgeous graphics, sweeping landscapes and a soundtrack that conveys a wide breadth of emotions ties all of this together.

“Dragon Age: Inquisition” is a masterpiece among RPGs, and has something for everyone. If you are the type who adores RPGs, dialogue and lore, I highly recommend playing the first two games in the series to get the absolute most out of the experience. If you are just looking for a memorable RPG to get you through Thanksgiving or winter break, look no further, because “Inquisition” really has it all.

Alessandro Arena-DeRosa can be reached at [email protected]