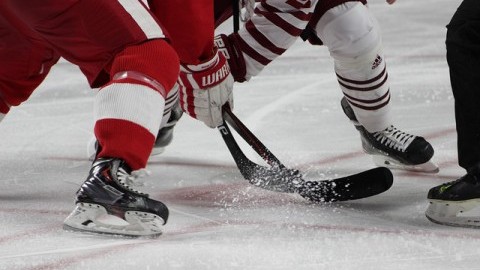 When the Massachusetts hockey team takes the ice against American International College this Friday night at Mullins Center, there will be no shortage of storylines.

UMass redshirt sophomore Frank Vatrano will face his brother’s former team, senior captain Troy Power will be facing off against an old friend, and goaltending coach Matt Voity will be up against his former employer.

For Vatrano, whose brother Greg Vatrano was a member of the Yellow Jackets from 2008-2010, playing against his brother’s alma mater is something that he’s always been looking forward to.

“I know last year he was here when we faced them but I wasn’t playing, so it’ll be nice to play against them,” Vatrano said. “I used to watch (Greg) play at AIC all the time so it’ll be cool because it’s like a hometown school to me. Playing in this game should be fun.”

While a sibling rivalry looms, Vatrano said he hasn’t spoken to his brother at all about the upcoming game, but was constantly reminded of last year’s contest when AIC shocked the Minutemen 3-2 at Amherst.

“I haven’t really spoken to him about it,” he said. “I know last year all I heard was ‘AIC beat UMass’ so hopefully we can change that around this year.”

After an exhausting six-game road trip that featured four Hockey East contests, Vatrano believes this Friday night will be extremely important as the team looks to get back in the win column.

“I think it’s really big. Obviously we didn’t get the points we wanted in our league play over the weekend, but I think playing at home for a bit of a stretch, we can get a good amount of wins,” he said.

From Teammates to Opponents

In 2006, Troy Power and Steven Hoshaw were members of a Bantam AAA team, the California Wave, that won a national championship.

The team was so popular a documentary In The Crease was created, featuring both Power and Hoshaw as key players.

Eight years later, the two California natives are now in their last year of college hockey, and both boast the role of captain for their teams, with Hoshaw being the leader of the Yellow Jackets.

“He’s a really, really close friend of mine and a good family friend, so I’m obviously excited about playing against him,” Power said. “Our relationship goes back probably eight or nine years, so we’ve known each other for a long time and still remain close to this day.”

With the game being on Friday, Power said he hasn’t gotten in touch with Hoshaw yet, but will certainly send him a message before they hit the ice.

“I’ll probably send him a text as the day gets closer, maybe tomorrow or Friday, but I’m definitely excited to see him,” he said.

This game will also be a bit unusual regarding the two captains, as both leaders hail from the West Coast and have found themselves commanding two teams from Western Massachusetts.

“It’s something that I never really thought we’d be doing,” Power said. “I know Steven’s a great leader, he was a great leader when I played with him, and I’m sure he’s doing a great job over there at AIC.”

“It’s just kind of wild that we both ended up so close to each other, and also as captains,” he added.

Like Vatrano, Power thinks this game presents a huge opportunity for UMass to gain some confidence, especially since the team’s next game isn’t until Nov. 21.

The redshirt senior said the team is looking forward to Friday, with one of the main reasons being they are looking to show they can win at home after a poor display in their first game versus Boston University.

“The last time we played in our rink we were embarrassed, and that’s something that will be in the back of our minds as we look to redeem ourselves,” Power said. “If you look back at this game from last year, we felt like we were the better team that night and they won. We need to show up on Friday night ready to win a hockey game – do the things we need to do to be successful.”