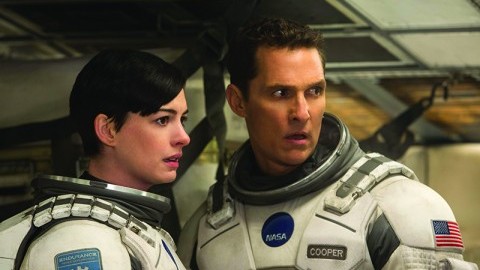 “Interstellar” surprised me. I walked into the theater last Thursday night expecting to see a bombastic space exploration flick. I did not expect the film to bring me to tears, as it did. The plot is centered on the final frontier, but Christopher Nolan’s latest is more than that. There’s a soul beneath the science-fiction spectacle. Love, mortality and the tragedy of lost time coalesce into an intricate, emotionally resonant narrative.

Nolan doesn’t pin down when exactly the film takes place. The director introduces a bleak vision of the near future, but establishes the timeline implicitly. Earth’s resources have dwindled too low to support the human population. Governments have collapsed. Dust storms ravage the barren streets. Nolan and cinematographer Hoyte van Hoytema frame the ravaged Earth with an appropriately muted color palette. Above sprawling fields of corn (the last surviving crop), the faded purple of the twilight sky looks hopeful.

The first act features occasionally heavy-handed speeches from older characters, as they lament generations of people who all wanted too much. Humanity’s future hinges on the discovery of a new habitable world. And so a team of astronauts, led by former test pilot Cooper (Matthew McConaughey), blasts off on a journey to find humanity a new home in the heavens. As a fictional reminder of the devastating effects of climate change, the sequence is foreboding.

But “Interstellar” isn’t a message movie. Nolan’s storytelling motivations are rooted more deeply in pathos than in politics this time around. Gone are the heavy undertones prevalent throughout “The Dark Knight” trilogy. The reality of environmental destruction merely serves as the broader baseline for a more intimate narrative.

At the film’s core is the story of a father willing to cross the universe to see his daughter again. As Cooper, McConaughey embodies that deep yearning. Every one of Cooper’s decisions is based on that goal of returning to her. The actor anchors the story’s loftier science with the gravity of a father’s love. When Cooper realizes the distance that has come between them, it’s heartbreaking.

The entire cast delivers an affecting, committed effort. Alongside McConaughey, Anne Hathaway, Jessica Chastain and Michael Caine elevate the film beyond its broader conflicts. They break down the mission to save the human species into a far more interpersonal struggle. Each character naturally evokes empathy. I have enjoyed most of the director’s films, but never before have I cared so much about his characters. With “Interstellar,” Nolan finally reached me on a human level.

The film reaffirms Nolan’s preference for realism. The deep reaches of space are stark and impenetrably vast. Nolan collaborated with theoretical physicist Kip Thorne to create visuals that accurately represented the distortion of light around celestial bodies with huge gravitational fields. Sound design masterfully augments the convincing images. Nolan depicts the lack of sound in the vacuum of space, and the silence is chilling. Every shot of the massive black void is terrifying.

Hans Zimmer’s score adds immeasurably to the film’s immersion. The composer and frequent Nolan-collaborator completely changed his style for “Interstellar.” He abandons his trademark broody string motifs in favor of blaring pipe organ and piano melodies. The music’s relentless energy is hypnotic. I found myself entranced by every scene. The director and composer have seamlessly integrated sound and image. Every musical cue gives the drama onscreen an added heft.

Nolan’s grand vision made me feel small again. I was captivated by the film’s sheer audacity, misty-eyed in pure childlike wonder. Movies have the power to transport audiences to other realities. They offer, in essence, a momentary escape. Nolan completely convinced me that I had left this world.

Three hours flew by in an exhilarating rush. Later, after returning to my dorm, I looked in the mirror. My face looked the same, but I felt that this cinematic journey had aged me. An entire chapter of my life seemed to have passed by. After travelling beyond the celestial horizon, returning to Earth was beautifully disorienting.

“Interstellar” is an odyssey into the unknown, but it’s also a tale about the transcendent power of human connection. The film confronts the inevitability of death with an inspired hopeful eye, and its genuineness carries the weight of its sound and fury. For Christopher Nolan, the secret to touching the viewer’s heart was somewhere in the stars.

Nathan Frontiero can be reached at [email protected]