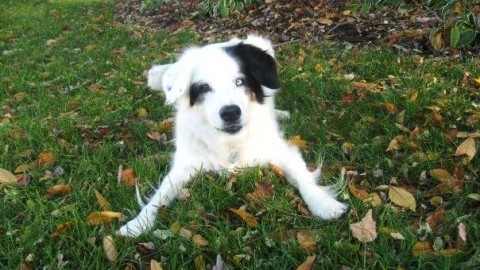 When I went home the week before Columbus Day weekend, I said goodbye to my dog, Bailey, for the last time. A 16-year-old Australian Shepherd/Husky mix, Bailey had been a part of my life since I was four years old. She was a friendly dog with two different colored eyes, one brown and one blue, a unique trait I never failed to brag about to my friends when I was younger. Whenever any of us opened the closet that stored the leash, she would run around the house in anticipation. She would spend thunderstorms hanging out in the basement with me.

Unfortunately, as Bailey got older, she began to suffer from severe arthritis to the point where we had to confine her to the main floor of our house. My parents made the decision to put her to sleep a few weeks ago when she began falling down and was unable to get herself back up.

I came home for Columbus Day weekend, and for the first time in my life, opened the door to a completely empty house. I realized that, after all those years, I had accepted Bailey as a part of our home, a part of the family that would always be there. Accepting that she was gone was a lot harder than I anticipated.

It’s hard to explain what it’s like to own a dog to those who never have owned one, but it’s definitely one of the most fulfilling experiences you can have. The sense of companionship, of friendship and of unconditional love is one that is hard to find in this world. She greets you with licks to the face as you open the door after a long day. She sits next to you happily as you rip open presents on Christmas Day, her own stocking stuffed with dog treats hanging from the mantle. When you come downstairs in the darkness to get a drink at 2 a.m., she’s lying there, keeping an eye out, making sure the house is safe.

Few feelings compare to that of walking your dog down the street, seeing her bark with excitement as she crosses paths with another dog, or throwing a tennis ball and letting her chase after it with pure joy, bringing it back to you again and again and again until she finally tires.

I’ll miss the little things, too. I’ll miss Bailey trotting over to the kitchen every time I take the cold cuts out of the fridge, looking up at me innocently, waiting for a slice of cheese. I’ll miss her loud barks whenever I wrestle with my dad or the doorbell rings. I’ll miss her dashing out into the yard after the first big snowfall of the year, leaving paw prints in the snow.

But most of all, I’ll miss having a friend to talk to, a friend who always listens and never judges. Whether I had blown the game or bombed a test, I could always come home, sit down next to Bailey, scratch her behind the ears and know that she still loved me no matter what.

Bailey played a huge role in my life, and now that she’s gone, there’s an emptiness in my house, a space next to the couch where she used to curl up every night, a space where her dog bowl used to sit. I miss her, but I will always look back on the times we spent together fondly.

I’m now in college and she’s now in heaven, but we grew up together, and nothing can ever take that away.