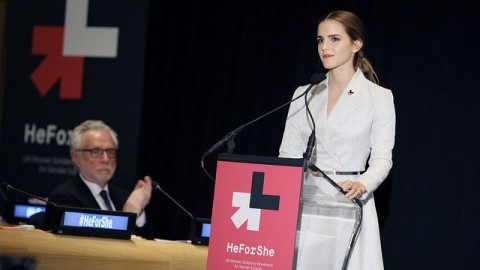 Feminists and non-feminists agree that “feminist” is a dirty word. I have always thought that “equalist” or “anti-sexist” would be less scary and more complete. Even I am frightened of the bra-burning protests of second wave feminists, but nowhere near as frightened as I am of stories of misogyny as told in Anthony Maddaleni’s piece on feminism in The Massachusetts Daily Collegian on Monday.

I identify as a feminist but I have some problems with the self-centered views of feminists today. Emma Watson’s speech to the UN recently touched on some of these ideas when she urged feminists to open the dialogue for men. Unlike most who think she focused on men too much, I do not think she focused on men enough. I think the feminist dialogue needs to talk about women and men equally. After all, is not equality what feminism is all about?

Masculinity, just like femininity, is a set of rules and standards that keep gender roles intact. We are taught these rules from birth so they seem natural and inevitable. And where would we be without them? Surely if we did not teach men to be men and women to be women, society would fall into a pit of asexual anarchy. Society relies on gender roles.

Except not at all. Gender and sexuality are so natural and subjective that they should not have to be reinforced. Masculinity and femininity are artificial, manmade to keep the gears of a society turning. I believe both men and women are oppressed by the existence of radical gender roles like we have today.

Yes, women are portrayed as sexual objects in the media and yes they face an immense amount of pressure to look and act a certain way. This pressure is crushing and consuming, and shapes the way women see themselves – but are men not subject to the same pressures? Look at the magazines; next to every toned, oiled body of a woman, there is usually a chiseled, equally shiny body of a man.

The difference is that women are allowed, even encouraged, to be insecure, while men are never allowed to drop the façade. Hundreds of thousands of publications a year are devoted to helping women change their appearance, acknowledging and perpetuating their insecurities. The same literature for men collects dust on weight room magazine racks.

Last fall, 1,086,627 high school-aged boys played football, making it the most participated sport in the country. Of those participants, 67,000 were diagnosed with concussions, yet some studies have shown than that 80 percent or more of concussions go unreported in high school football. In that study, players cite fear of being thought of letting others down a reason to downplay brain injuries and put their health in danger.

Ten million males in the U.S. will suffer from a clinically significant eating disorder in their lifetimes. About 10 to 15 percent of cases of anorexia and bulimia are in males, and those are just those who are not too afraid to come forward.

Nike made over $1 billion on mid-calf socks last year. People say girls are insecure, but have you seen how many mirrors there are at the gym?

Just because in our culture men are not allowed to admit to insecurities does not mean they do not exist. Men are under just as much pressure to be good-looking, the breadwinner and hypersexual as women are supposed to be sexy and submissive. The difference is that a central part of masculinity is confidence, and frankly, if a man is not confident they are less of a man. According to the National Association for Anorexia Nervosa, males are less likely to come forward about eating disorders because they are seen as “women’s diseases.” Insecurity has been dubbed a feminine emotion.

Nowhere is this silence more prominent than in cases of sexual assault. Today women are speaking out against rape culture, blaming fraternities as the worst perpetrators. Women are living in fear, and with good reason – one in six women have been victims of attempted or completed rape in her lifetime.

At the same time, one in 33 men will be part of that same statistic. About 10 percent of attempted or completed rapes are against males.

Where is the support for these victims? Instead of speaking out, men are either too embarrassed to admit to sexual assault, or not taken seriously when they do.

How embarrassing and emasculating must it be for a man who is encouraged to be hypersexual, to admit to sexual assault in a world where he is seen as the problem? There is nowhere for men who have been sexually assaulted to turn, either because society has dissuaded them from doing so or refuses to listen.

Sexual assault is a much more dire matter for women than men, but including men in the conversation is one step toward understanding and equality.

I am not denying the fact that history has always sided with and catered to men and that men have obviously made it out on top. Ask any feminist how they feel about their 78 cents earned for every dollar men earned, and you are sure to get an earful. I would argue, however, that the male and female stereotypes were created a long time ago to keep a greater vision intact, a vision that has slowly been chipped away since our brave, strong, smart and charismatic founding fathers first scrawled their names on the Constitution of our country.

They created a country where women could not vote, a country where property rights followed patrilineal descent and a society that relied on the strong backs of its male workforce. Oppression was written into the essence of our Constitution, not just for women but for blacks as well. The scariest part is that the same document that denied women the right to vote, and the same document that legalized slavery and the same document written by men, for men is still governing the United States today. Amended, copied, pasted, whited out and rewritten, but still intact.

In our generation, no party is at fault for the existence of gender or racial inequality, but everyone should be responsible for trying to end it. I do not believe that outrage and pointing blame from either side is the path toward equality. You cannot blame individuals of today for conforming to ideas drilled into society for centuries, all that we can do is try to reach them and slowly break into and understand their minds.