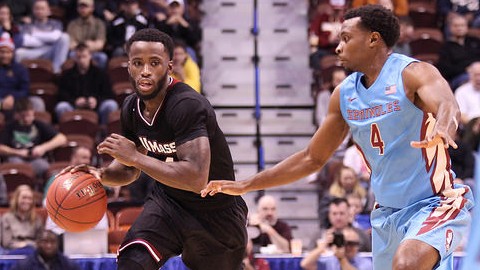 UNCASVILLE, Conn. — The Massachusetts men’s basketball team is accustomed to relying on its starting unit for significant production in the early stages of a young 2014 season.

But in Sunday’s 75-69 victory over Florida State, the Minutemen couldn’t rely on the same formula that resulted in three wins to start the season. Center Cady Lalanne and Maxie Esho fought foul trouble in the second half while starting guard Derrick Gordon injured his foot in the second half and missed the last eight minutes of the game.

UMass coach Derek Kellogg had little choice but to integrate his bench into crucial minutes. And a mixed and matched combination of role players answered the challenge in the victory.

“It gave us a little confidence and swagger back,” Kellogg said. UMass returned to the win column just a day after losing its first game of the season to Notre Dame, 81-68.

“It also let us know that there’s other guys on the roster that can do some things. My job is going to be to facilitate and continue to get those guys more involved.”

Guards Jabarie Hinds and Donte Clark and forward Zach Coleman combined to play 77 minutes, score 32 points and reel in nine rebounds. Kellogg played the trio of reserves – his first three rotational players off the bench – throughout a second half in which the Minutemen clung to a slight lead.

Clark was especially instrumental in leading UMass to a victory.

His final points of that run, a 3-pointer, extended UMass’ lead to 62-57. While Esho and Lalanne remained on the bench due to foul trouble, Clark increased the tempo, initiating offense on drives and opening up spacing throughout the floor.

Clark was one of UMass’ top scoring options, something Kellogg said he hoped would become the case throughout the season. Clark’s averaged 12.5 points over 26.5 minutes in his past two games.

“You guys know how I am, I’m kind of rough on the younger guys,” Kellogg said. “It takes a while to get in my good graces with the new players and I think he’s done that quickly … he has a natural instinct for the game on the offensive end that’s hard to teach.”

“Yeah, I’m definitely getting more comfortable playing with these guys,” Clark said. “I know I just have to get open and make shots when they pass it to me.”

While Clark helped extend the lead, it was Hinds who closed it out.

After playing only 12 minutes against Notre Dame, Hinds scored 15 points on 5-of-10 shooting in 25 minutes Sunday. He scored nine of UMass’ final 13 points and started the scoring run with a pair of acrobatic layups after beating his defender on 1-on-1 moves to slither into the paint.

His final five points came at the free throw line and iced away the victory.

Coleman’s role didn’t show up offensively – he only scored two points in 24 minutes – as much as it did defensively. Esho played only 17 minutes, giving way to Coleman. It was the first extended action for the redshirt freshman this season.

“I’ve been trying to get him some minutes,” Kellogg said. “Tonight he proved, you know what, just go ahead and put him in.”

“I thought he played well, he rebounded the ball, he did a nice job defensively and he gave us some valuable minutes off the bench,” Kellogg said.

“It felt good out there,” Coleman said. “I was just patiently waiting for my time to be called and I was called out there to come do some things and I felt like I did a pretty good job.”

Kellogg acknowledged following the game that the victory showed “character,” saying his team needed it following a difficult loss the day before. It also proved UMass – which has more depth than a season ago – can rely on its bench for longer stretches in important games.

“When everybody contributes, everybody feels good,” Clark said. “As long as we stay together, we’ll be good.”