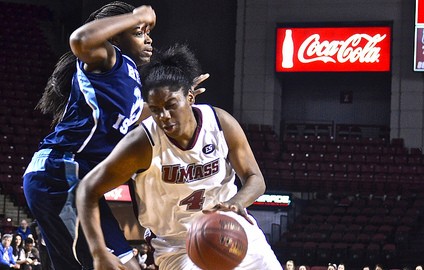 Looking for its first win of the 2014-2015 season Sunday, the Massachusetts women’s basketball team came up with a last-minute rally against Central Michigan, highlighted by great defensive play, before falling one possession short in a 72-70 loss.

The Minutewomen (0-2) trailed by 13 points with 42 seconds left in the game before embarking on a 9-0 run over the next 33 seconds, cutting the deficit to four points. But nine seconds wasn’t enough time for UMass to pull through in a two-possession situation, as a Leah McDerment three-pointer was all the team had time for in a five-point game.

Coach Sharon Dawley said the Minutewomen’s defensive effort in the final minute of play against the Chippewas played a major role in halting UMass’ comeback attempt.

“(The defense) put on a full-on press and we trapped,” Dawley said, describing the rally. “We got back-to-back steals doing that. Out of five defensive possessions, we were able to get three steals and convert.”

With a little more than seven minutes remaining in the game, UMass could have avoided the comeback situation, when it trailed by three points before CMU went on a 13-0 run. Dawley said a big factor in the extended run was the absence of defensive stalwart Rashida Timbilla, who was on the bench at the time.

“Resting (Timbilla) was the biggest problem in that time period,” she said. “(CMU’s) whole run coincided with (Timbilla) getting a breather.”

Timbilla had a big game for the Minutewomen on both ends of the court Sunday, recording a double-double with 14 points and 12 rebounds on 5-of-11 shooting from the field. Despite her seven turnovers of her own, the junior was able to generate seven steals and a block in a strong defensive performance covering Chippewas’ guard Crystal Bradford. Bradford, normally a consistent shooter, finished 6-for-14 Sunday.

“I thought (Timbilla) was the best player on the floor,” Dawley said. “Her impact was mostly defensively and rebounding but she also ignited the fast break. Her impact was on both ends of the floor.”

“She did a great job keeping (Bradford) in front. Bradford had to work a little bit harder getting into the paint, and I thought (Timbilla played) solid defense. (Bradford) was challenged and she missed more shots than she’s used to missing.”

Even with the defensive effort from Timbilla to help the Minutewomen force 20 turnovers against CMU, the Minutewomen also struggled with ball possession, turning the ball over 19 times.

“Four (steals) come to mind (of us) just pretty much giving it away on who we were passing to,” Dawley said. “We talk a lot about triple threat and ball fakes. There were a couple times where it was clear where we were passing to. It’s something we know we have to keep working on.”

Free throws were also a problem for UMass, who converted on just 18-of-29 attempts.

“(Free throws have) been a problem for us,” Dawley said. “The kids take a lot of them, so now it’s just mental and we need to step up to the line and be confident. But free throws are something that the more you talk about it, the worse it could get.”

The Minutewomen will look to get their first win of the season at home on Wednesday, when they take on Maine at 7 p.m.