My mental illness does define me (to an extent) 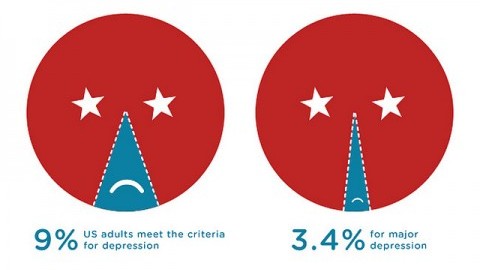 If you decide not to read this entire column, let me just make one thing clear: a person’s mental illness – depression, anxiety, PTSD, schizophrenia, eating disorder – will never be the definition of said person. Nobody should be labeled by a component of his or her life that doesn’t even come close in value to personality, aspirations, relationships and everything else that makes us who we are.

Personally, though, I think my mental illness does play a part in defining who I am – and what’s more, I have no shame in that.

My battle with an eating disorder does not make me “an anorexic,” as though I am a part of some external community set on the outskirts of normality. But my experiences have helped shape me into the person I am today and I can’t pretend their role in my life never existed.

The real issue is we live in a society where mental health problems and physical health problems can be equally uncontrollable, detrimental and life-threatening, but the latter is the only one that is socially acceptable to talk about.

We look at the man who struggled through cancer treatments and feel tears in our eyes when he proudly announces that he is a “cancer survivor.” He is not and never was “cancer.” It is that second word that emphasizes the fight, the exhaustion and emotional pain that he has had to go through at the hands of a terrible sickness.

Why is it that that man would not receive the same sympathy for being able to say he has gone through hell and back and nearly lost his life at the hands of a terrible sickness if that sickness was of his mind?

Today, hearing those four words makes most people want to turn away from what they don’t understand, uncomfortably downcasting their gazes as they retreat from a problem that affects one in 10 Americans, but scarcely receives the same attention and support that would come with recovery from a physical illness.

But Breel’s talk, “Confessions of a Depressed Comic,” advocates speaking those words as the key to accepting who we are and how we have struggled so we may better be able to overcome mental illness and reduce the stigmas that surround it.

“Right now, depression is society’s deep cut that we’re content to put a Band-Aid over and pretend it’s not there,” he said. “Well, it is there. It is there, and you know what? It’s okay. Depression is okay. If you’re going through it, know that you’re okay. And know that you’re sick, you’re not weak, and it’s an issue, not an identity.”

Those two ideas are extremely important and not mutually exclusive: mental illness is okay and it is not an identity. Often, the first can blur into the background when we are so fervently supporting outcries of, “Mental illness does not define me.” Some try to escape its existence entirely, to throw any current struggles into the past and bury it all as though it can just be detached from their lives and forgotten.

The truth, whether they like it or not, is that these people are who they are in some part because of their struggles, and trying to run from something that certainly doesn’t make up your identity, but that is still a part of your person, is only perpetuating the stigma that says we should be ashamed of our struggles.

This article is my last of the semester as a Collegian columnist writing about mental health. My first article in September detailed some of my struggles with anorexia nervosa. To say I was a little freaked out on publishing day would be an understatement. In no time, it was circulating the Internet among friends, family and high school classmates, revealing a secret I’d kept hidden from everyone except a handful of loved ones. I kept worrying about what this made me in their eyes.

It took weeks for this fear of becoming “that girl who wrote an article about her anorexia” to shift into pride in everything I had accomplished despite my mental illness. Like everyone else in the world, I have had struggles, but just because mine has a label doesn’t mean that label overshadows everything else I am.

Everything that battling my mental illness has taught me, every obstacle that it has handed me that I have been able to overcome simply adds another feature to the thousands that make me who I am: Student. Co-worker. Writer. Reader. Runner. Blogger. Activist. Sister. Niece. Cousin. Friend. Daughter. Survivor.