O.A.R. and Andy Grammer join forces at the Calvin Theater this Sunday 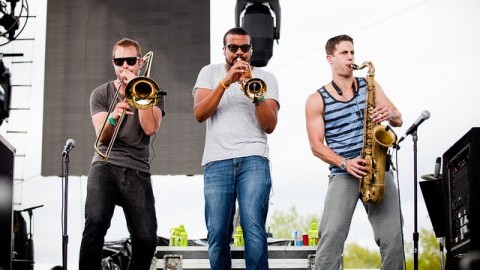 O.A.R. and special guest Andy Grammer will bring their 90s style and reggae-infused college rock to the Calvin Theatre this Sunday at 8 p.m. Joining forces on tour for the month of November, O.A.R. and Grammer are teaming up to create an eclectic mix of punk-blues and reggae-rock.

With a tour taking the band from Northampton to Nevada, O.A.R. is on the road promoting its newest album, “The Rockville LP,” released June 10. Starting in 1996 with just a few dedicated supporters, O.A.R. created a grassroots fan base that culminated in a 2006 sell-out at Madison Square Garden in New York City. This rapid success was coupled with an equally quick burnout. On the verge of a breakup, the band decided to return to its roots in Wootton, Maryland, where it first started. Journeying back home recreated the memories that encouraged “The Rockville LP,” which the band deemed as a sort of reboot.

The album is a return to form for O.A.R., but also displays a new, more country-based sound for the band. This can be attributed to recording parts of the album in Nashville, Tennessee with the help of Nathan Chapman, who is best known for his work with Taylor Swift.

Despite its country influence, “The Rockville LP” still focuses heavily on the smooth reggae-inspired beats that define O.A.R.’s trademark sound. Fans responded positively to the band’s new approach, as “The Rockville LP” earned a No. 13 spot on the U.S. Billboard 200.

Andy Grammer is currently on a similar coast-to-coast venture and met up with O.A.R. to embark on a month-long combined tour. Grammer is traveling to promote his sophomore album, “Magazines or Novels.” He already set a high bar for himself with his self-titled debut in 2011, but “Magazines or Novels” truly surpassed both critical and commercial expectations.

Capitalizing on Grammer’s vocal skills, “Magazines or Novels” takes the listener on a journey marked by both lyrical and rhythmic expression. The album satisfied previous fans and with catchy songs such as “Back Home,” but Grammer was able to create a new fan base as well, one that propelled “Magazines or Novels” to a peak spot of No. 27 on the Billboard 200 charts.

With O.A.R. as the main act, the promise of an exciting live performance is already in order. O.A.R. is known for its vibrant and intense live shows. With an extensive background in performing, the band has developed an undeniable chemistry that allows it to work a crowd and create a charged, exciting atmosphere.

This will be O.A.R.’s second tour in support of “The Rockville LP.” The first tour was met with much acclaim from the band’s widespread fan base, and the second tour behind the new album promises to be just as electric.

While Grammer does not have the sort of veteran status of O.A.R, he does have upbeat and catchy songs like “Honey I’m Good,” “Keep Your Head Up” and “Back Home.” Songs like these are sure to effectively warm up the gathered masses at the Calvin Theater for O.A.R.

This weekend is a chance for audiences to see a veteran band with a reputation in live shows perform alongside an up-and-coming artist who has the potential to become a big name in music. You can see them both at the Calvin Theater this Sunday at 8 p.m. Tickets are $40.