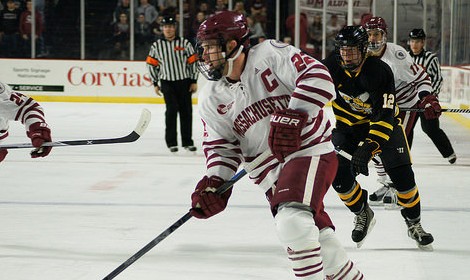 In its first game at home since an 8-1 defeat in its home opener on Oct. 10, the Massachusetts hockey team returned to the Mullins Center with much different results Friday night, defeating American International College, 7-1.

“Any time you score seven goals in a game, it’s a confidence boost in your offense,” senior Zack LaRue said. “You’ll take production from anywhere you can and it’s nice to see all four lines going.

LaRue finished with two goals on the Minutemen’s third line, which produced five points. After the game, Micheletto said that the line, consisting of LaRue, senior Steven Guzzo and freshman Dominic Trento brought a lot of energy Friday.

Micheletto said that for LaRue in particular, whose four goals through eight games surpasses his three total goals that he had in his previous three seasons, confidence has been the key in 2014.

“You’re seeing a little more confidence in his play right now and his ability to settle pucks down,” Micheletto said. “He’s always had a tremendous shot, it’s just a manner that he’s able to get it off a little bit more.”

The third line was supported Friday by the productive play from the Minutemen’s first and second lines, which finished with seven and four points respectively.

The starting forward combination of Ray Pigozzi, Steven Iacobellis and Frank Vatrano combined for three goals against the Yellow Jackets. According to Vatrano, who was moved to the line last weekend against Maine, the chemistry among the three sophomores is evident.

“All three of us play a different style of the game,” Vatrano said. “(Pigozzi’s) a playmaker who works really hard, (Iacobellis) works really hard too in the corner and makes good plays, so I think there’s real good balance on the line.”

“I think it’s just getting more comfortable,” Vatrano said. “Getting more games under my belt, I’ve come to getting used to the pace of college hockey.”

Along with Vatrano, freshman Dennis Kravchenko continued his own scoring streak, capitalizing on his fourth goal in three games.

Playing alongside Patrick Lee and senior captain Troy Power, Kravchenko anchored a second line that started off the game’s scoring in the first minute of regulation. Just 57 seconds into the first period, Power found Kravchenko in front of the net for a one-timer that gave UMass a 1-0 lead.

The goal gave the Minutemen a lead that it would hold for the remaining 59 minutes of play.

“Guys around me are just doing all the little things,” Kravchenko said. “I’m not really doing anything different. I’m just trying to keep playing my game.”

Moving forward, Micheletto said he hopes to see similar balanced attacks on offense. He added that with the Minutemen’s high-pressure attacking style, it will be needed to avoid slowing down.

“We play a very up-tempo style and it’ll wear a team down,” Micheletto said. “Not only will it wear the opposing team down, but it will wear you down if you can’t play four lines.”

LaRue added that the depth gives UMass a distinct quality if it is able to be replicated on a consistent basis.

“You know you have your top two lines and that’s usually the guys you rely heavily on to score the goals, but when you’re getting them across the board from all four lines, that’s something special,” LaRue said. “You don’t see every team with that.”