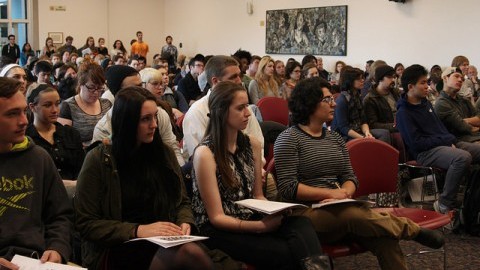 (Christina Yacono/Daily Collegian) Students at theStanding Together Against Racism: A Day of Solidarity Read-In.

The “Women of Color and Media (Mis)Representation” panel Wednesday set out to highlight how the mainstream media’s representation of women of color continues to confine them into categories that do not accurately represent all women of color.

The panel, which included three professors and two Ph.D., students, explained the problematic boxes Latina, African American and Native American women are often placed into by the media. Mari Castañeda, a professor in the communications department, along with the rest of the panelists called for a “broader intersectional of feminist analyses of the media.”

“I want people to walk away (knowing) that we are in a continual struggle to control our own images,” said Karen Morrison, a professor in the Afro-American studies department.

She called for the unification of women of color in order for them to “understand the contextualization within transforming systems of capitalism.”

“(The) media’s representation of women of color has not been stagnant. It has changed over time. Different people have participated in positive and negative ways, unfortunately the negative still prevails,” Morrison said. “(Women of color) are all in that fight to be more inclusive as a community – not just a national community, but an international community as well.”

Cassaundra Rodriguez, one of the panelists and a Ph.D. student in the sociology department, focused on how the negative depiction of Latinas in the mainstream media has led to a troubling representation of Latinas.

Rodriguez finds the already small percentage of Latina actresses being confined to those roles demonstrates how “the representation (of Latinas) in the media is very different from the lived experience of Latinas.”

She explained how the problem goes beyond the stereotypical roles of Latinas in mainstream media and includes the media’s depiction of all Latinas as white-skinned Latinas. According to Rodriguez, that clearly shows how the media does not acknowledge the diversity within the Latino communities.

“When you do a Google search for a movie with Latinas or Latino families, you are going to see lighter skin Latinos,” Rodriguez said.

She continued, saying not only does the mainstream medium need to diversify the roles played by Latinas, but they also need “to bring Afro-Latinos in the space, (because) in the mainstream, they are not there.”

Rodriguez also found it problematic that mainstream television does not try to distinguish between different Latinas.

“When you have a Latina character, she is sort of a mix of all Latinas … so, the people that are writing these characters do not even know that Latinas are actually a really big group, with different histories, different ways of speaking and different takes on (Spanish) words,” she added.

The panelists emphasized the misrepresentation that women of color are often depicted as “exotic,” which many claim is used “to keep the purity of European women as mothers,” according to Donna L. Moody, a Ph.D. candidate in the anthropology department.

Allison Butler, a professor in department of communication, said white women are also confined to motherhood and purity, but because they have a bigger representation in the media in comparison to woman of color, they “are put into a box that is more flexible.”

“White women are compartmentalized in very damaging ways, but what we have to sort of fall back on, is that White,” she added.

Butler concluded that the bigger problem is that “people who are considered to be white have unwritten privileges, because White (has) become the unnamed normal against which others are compared.”

Sorelle Mbakop can be reached at [email protected]