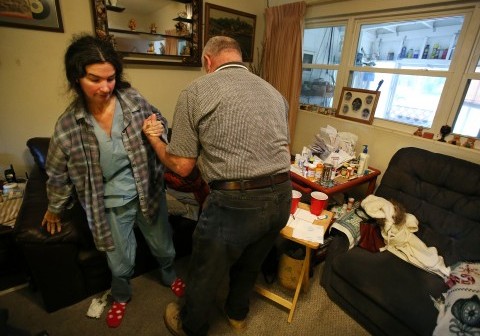 George and Betty Coumbias wanted to die together. George was dying of advanced heart disease and Betty did not want to live without him. Betty, however, was in excellent health. They were both 71 years old.

In 2007, they travelled to Zurich, Switzerland, to Dignitas, a Swiss group specializing in providing assisted suicide to both Swiss nationals and foreigners. After meeting with Swiss authorities, their request was denied, although Dignitas had expressed they would fight the case and attempt to fulfill their suicide “pact.” In 2009, Betty developed terminal cancer and died, while George still lives with his heart disease.

The Coumbias’ story, chronicled in the film “The Suicide Tourist,” sparked much debate about the ethical issues related to physician-assisted suicide. Dignitas was highlighted in the film, and also came under renewed scrutiny.

Dignitas represents many of the arguments against assisted suicide and death with dignity, and has assisted in the deaths of over 1,000 people since its inception.

Those seeking the services of Dignitas do not need to have a terminal illness or Swiss residency. In fact, 60 percent of those who have died with Dignitas are German, and 21 percent had no reported terminal illness, instead citing “weariness of life” as their main motive.

“Suicide preparation and assistance” can be bought for €4,000, and funeral services can be included for €7,000. Perhaps most suspicious of all, Dignitas is labeled as a non-profit organization in Switzerland and does not have to disclose its finances under Swiss law.

There are not similar clinics popping up around the world. People from other countries travel to Switzerland and pay a lot of money to receive their services because they have no other options.

Advocates against death with dignity could use Dignitas as an example of the “slippery slope argument’” – if we give leeway in the laws regarding physician-assisted suicide, it will lead society down a road toward profit-centered murder clinics where businesses reap profits from people wishing to “end it all.”

Dignitas, while pushing the envelope ethically, would theoretically be pushing us toward this Soylent Green-esque dystopia. According to its website, Dignitas operates under a Swiss law that states, “Whoever, from selfish motives, induces another person to commit suicide or aids him in it, shall be confined in the penitentiary for not over five years, or in the prison, provided that the suicide has either been completed or attempted.”

They argue that because they do not act from “selfish motives,” their operation is completely legal, and the Swiss authorities agree. They often have trouble, however, renting spaces and apartments to conduct their services due to moral motives of the landlords. Due to this, Dignitas has been known to operate creatively, and in at least one instance, performed an assisted death within the patient’s car.

If Dignitas represents a trip down into the rabbit hole of possibilities regarding death with dignity, what are we supposed to make of Brittany Maynard? Any discussion of this has to begin with the law that made her decision possible.

Oregon’s Death with Dignity Act, passed in 1994 by a popular vote of 51.3 percent, made the state one of the first areas of the world where certain terminally ill patients could choose the time of their dying. The law contains stringent stipulations including: The patient must have been diagnosed with a terminal illness with a prognosis of less than 6 months; the patient has to initiate the request for a prescription of a lethal dose of medication; the request has to be made with two witnesses present (at least one of whom is not related to the patient, a worker at the health facility, or has any stake in the estate of the patient); the patient has to be evaluated by another doctor and if any evidence of coercion or depression is evident, the medication cannot be prescribed until the patient receives a full psychological examination.

Since the act was put in place in 1998, 1,173 people have been prescribed a lethal dose of medication. Of these, 752 patients (64 percent) have ingested the medication and died. In 2013 alone, 122 people received prescriptions and 63 ingested the medication (52 percent). The most cited reason for dying was “loss of autonomy”(93 percent), followed by “loss of ability to participate in activities that make life enjoyable”(88.7 percent) and “loss of dignity”(73.2 percent).

At first glance, it is easy to see “death with dignity” does not coincide with our traditional view on suicide. In 2013, only 52 percent of those who receive the prescription actually used the pills to die. For them, “death with dignity” meant having options. It meant having some measure of control. It was not because they were depressed, angry or had “given up.” It was because they had lost the physical ability to live their lives with dignity in an enjoyable manner.

Brittany Maynard presents us with a unique example: a young woman, active until the end in charitable works around the globe, travelling and being an overall inspirational and passionate human being, cut down at 29 years old by one of the most lethal and agonizing cancers.

She never gave up, and fought until the end to extend her life. In the end, her greatest gift was sacrificing her privacy and allowing the world to begin reconstructing their views on this issue. Death with Dignity is not suicide. It is also not only for aging people. It is an option, a comfort, a sense of control for a person suffering through immense physical pain.

Samuel Fountain can be reached at [email protected]