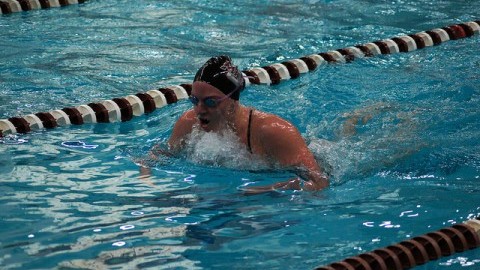 (Cade Belisle/Daily Collegian) Women's Swimming and Diving at the UMass vs. Brown competition, on Nov. 8.

After the first four meets of the season, the Massachusetts women swimming and diving team is currently 2-2.

While UMass is dealing with some injuries, other swimmers have stepped up in larger roles and impressed, especially sophomore swimmer Meriza Werenski.

Her latest achievement was being named the Atlantic 10 Performer of the Week for her strong performance in a losing effort against Brown, where UMass was defeated 151-149.

“I’d say it’s a pretty cool feeling and an honor. I did not expect to be named A-10 Performer of the Week,” she said.

This year, Werenski has raced in 11 events and of those 11, she has come in first 10 times. She started off the year undefeated until the last meet against Brown where she came in second in the 100 yard breaststroke.

Werenski was enchanted with UMass the first time she saw it and doesn’t have a doubt in her mind about her decision to commit to the program. Now, she’s finding success.

“When I came to UMass, I knew that this is where I wanted to go to college. I loved everything about the school, especially the team and coaching staff,” Werenski said. “I really enjoy swimming at the collegiate level. The competition is great and I love being a part of the team.”

A possible reason for her second year success is that she is a lot more comfortable with being a student-athlete.

“It is a lot of work being in college and competing athletically. As a freshman, it took me time to get acclimated. As a sophomore I know better what to expect,” she said.

But she added that much of her success is credited to the people closest to her.

“I never would have been able to accomplish any of my swimming goals without my coach or teammates. They have all pushed me to better myself in every practice and meet,” Werenski said. “My family also has been extremely supportive of me since I started swimming and I am grateful for that.”

While she’s been happy with her progress thus far, she wants to continue to grow both as a swimmer and a teammate.

“Personally I am always looking to improve my technique and be a good teammate in and out of the pool,” she added.

Werenski and the rest of the UMass women’s swimming and diving team will continue its quest for the Atlantic 10 Conference title as it returns to action Nov. 21 when it travels to Boston for the three day Terrier Invitational.

And when it comes to the team, she’s thinking big picture.

“Naturally, our end of season goal would be to win the A-10 Conference title,” she said.

Victor Pusateri can be reached at [email protected] and followed on Twitter @victorpusateri.