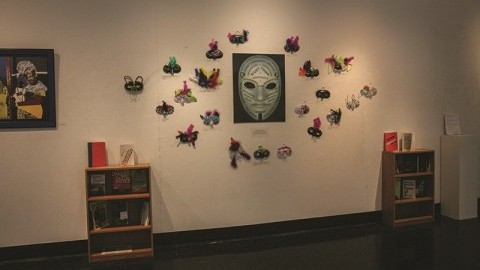 Since the on-campus vandalisms, many members of the University of Massachusetts community have spoken out on the issues of racism and oppression and the negative impact it had on the community. To continue to raise awareness of these issues, the Center for Multicultural Advancement and Student Success has sponsored the “Stand Against Racism Exhibit: Representations of Oppression and Liberation.”

“(The purpose of the exhibit) is to shift paradigms by creating a space where individuals can express their liberation freely and positively,” said Wilma Crespo, associate director of student development for the Center for Multicultural Advancement and Student Success. “Conscious or unconscious, oppression is running rampant. Agents of social change are constantly challenging, advocating, educating and empowering others. This output of energy depletes their emotional, physical and spiritual state.”

Located in the Student Union Art Gallery, the exhibit consists of loaned items from the community that represent forms of racism and oppression, as well as forms of healing from oppression. According to Crespo, the items reflect the overall purpose of the exhibit.

“Through this exhibit, we wanted to create an outlet to replenish much needed energy and envision liberation,” Crespo added.

The exhibit opened on Nov. 3 and was organized by the CMASS-led Stand Against Racism Planning Committee. The committee meets during the spring semester to plan for Stand Against Racism Day in addition to planning exhibits for the fall. The current exhibit, Crespo said, is the third exhibit the committee has organized for the fall semester, although it is not the exhibit that was originally intended to be on display.

“The original exhibit was still in developmental stages so we postponed it until the spring semester and quickly started working on the current exhibit,” Crespo said. “The time and length of the exhibit is determined by the director of the gallery. It was timely (due to recent events).”

The exhibit is open from 10 p.m. to 5 p.m. Monday through Friday, and admission is free. The run of the Stand Against Racism exhibit will be extended until Friday because of the continued positive response from the UMass community.

“It has received great response,” Crespo said. “On day three (of the exhibit’s run) we had 90 visitors come by the gallery. The graduate students meeting with the Diversity Strategic Planning Committee relocated their meeting to the gallery, and a communications class on convergent media and activism will be having their class there this week. The mural is getting filled with contributions from visitors. The message is getting exposure through cohorts across field and interests, and that is more that we can expect.”