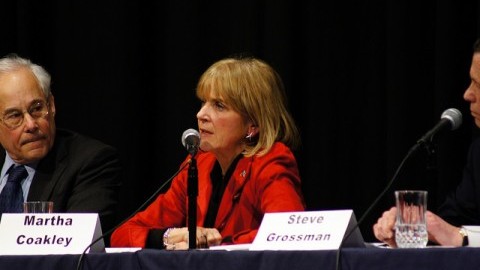 We’re going to move ahead in Massachusetts to a state that’s prosperous and fair.’”

Not only does she have a plan, but she “can’t wait to start.”

For her passion for fighting inequality and giving voice to the voiceless, the Massachusetts Daily Collegian Opinion & Editorial staff endorses Martha Coakley for governor of Massachusetts.

Her Republican opponent Charlie Baker, who lost to Gov. Deval Patrick in 2010, wants to be governor because he thinks he can make a difference.

“I think I can make this state great,” Baker told the Boston Globe, “and I really enjoyed, in fact loved, my time I spent working in state government before, with the back and forth, with the opportunity to make stuff better.”

In a dead heat with Baker, Coakley faces fierce opposition not only from him but from a woman-averse electorate (Massachusetts has only elected two women to statewide office in its history, State Auditor Suzanne Bump and U.S. Sen. Elizabeth Warren) and a negative reputation since losing to Scott Brown in the 2010 special U.S. Senate election.

The major party candidates have substantive policy differences. On higher education, Coakley wants to spend $250 million to increase financial aid at community colleges and establish a tax deduction for college savings. Baker, solving a non-problem with old solutions, wants to increase online courses, offer three-year degree programs and offer accelerated master’s programs for high-performers, all of which the University of Massachusetts does already.

In addition to less sick time, a Baker governorship would also mean more pressure on the poor, as he plans to “reform” the welfare system by enacting stricter work requirements for those receiving benefits and keeping poor workers at jobs until age 66 instead of 60.

Baker has also attempted a reinvention from his 2010 campaign in which he rejected human-caused climate change. David Bernstein dubbed it “Charlie Baker 2.0” and said he’s the “nicest guy you’ll ever meet,” but he “will not give a straight answer to a single question.”

Yet Coakley faces far more pressure from the media on her 2010 loss than Baker does on his new personality. Charlie Pierce summarizes brilliantly, saying, “(Baker) gets credit for soft-pedaling the executive (attitude) that sank him in 2010 while she has to fight the last battle, over and over again.”

With her passion for fighting inequality, Coakley is the leader Massachusetts needs. An old industrial state with a booming technology industry and regional variation, Massachusetts has been uniquely susceptible to increasing inequality faced in the United States. Since 1993, U.S. per capita GDP has increased 40 percent. But real household incomes only rose 4.8 percent, according to the New York Times.

Regardless of where that 35 percent has gone, Coakley wants to bring it back to the average Massachusetts citizen. As her Democratic primary opponent Treasurer Steve Grossman noted, we are facing “a tale of two Commonwealths.” One that is gaining exceptional wealth from technology and new industries, and another that stagnates as poverty rises and cities fall apart.

After Grossman and his idealism left the campaign in September, Coakley is the only candidate in the race who can carry the message of “one Commonwealth that leaves no one behind” to the corner office on Beacon Hill.

As she said in her 2010 concession speech, “(People) are angry about health care issues, and our two wars, our inability to properly care for those who return home after fighting.

“I had hoped, in the best interests of our state and the country, to go to Washington to address these issues. … I will continue to fight and address them here with everybody in Massachusetts.”

We now have the opportunity to extend her already impressive service as the people’s advocate. As the Patriot Ledger Editorial Board said, Coakley “has embodied the government’s contract with its people to be voice for the voiceless.”

Baker has showed whom he stands up for: health care companies, rich taxpayers and the private bottom line.

Coakley has defended children and families for 20 years, and now she wants to invest in our kids and workforce to make Massachusetts more fair and prosperous. That’s why we’re supporting her for governor on Nov. 4.