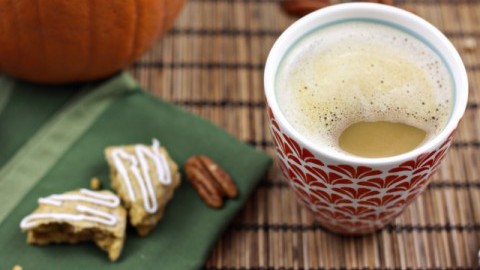 Pumpkin spice. It’s hard to remember when there was not an endless surplus of its sweet and savory flavor during the fall, so much so that it may be exhausting its appeal. Considering that beer, Oreos, M&Ms, tea, pastries, chap-stick, candles, shampoos, condoms and much more now can be bought in pumpkin spice flavor. The most quintessential form this flavor takes is the pumpkin spice latte, selling more than 200 million since its Starbucks creation.

As the pumpkin spice craze has received popularity among common food products, it has also found its way onto talk shows as a source for comedic critique. Jimmy Kimmel, on his popular ABC series “Jimmy Kimmel Live,” joked this year that the arrival of the pumpkin spice-flavored iPhone 6 was surely on its way. John Oliver on “Last Week Tonight” bashed the pumpkin spice latte, claiming it “tastes like a candle tastes.” He then offered an explanation that people “tolerate” it because of the love the fall, the “best season.” The pumpkin spice latte, like any seasonal or holiday food, is a way to celebrate the time of the year it symbolizes.

In 2012, New York Magazine reported pumpkin spice as having a “baconlike ubiquity” due to its strange and sudden omnipresence and proliferation nationwide. Pumpkin spice beer, of all things, has skyrocketed in sales over the past few years. The Washington Post speculated on this recent increase in sales to be “an industry push to attract more women to the beer segment,” since the pumpkin spice latte is more commonly consumed by females than males.

The pumpkin spice latte is otherwise known by its popular alias, #PSL, establishing it as a cyber entity. During the fall, it receives 3,000 tweets per day across 40 countries. However, the sad reality that there is not actually any pumpkin in the typical recipe has outraged fans. Rather, pumpkin spice is usually a simple combination of the all too familiar ingredients nutmeg, cinnamon, ginger and all spice. Health activists believe the term to be misleading and the beverage too unhealthy to be so commercially consumed. But, like any delicious franchise food, the PSL does not look like it is going anywhere.

The Starbucks pumpkin spice latte was first launched a decade ago, when the there was very little on the preexisting market with such a risky flavor. Subsequently, sales went up and the popular coffee franchise knew it struck caffeinated gold. Cliff Burrows, the United States group president of Starbucks, said that the pumpkin spice latte gives the costumer a sense of “joy,” “warmth” and “comfort.”

Like any delicious franchise food, the PSL has become a fall staple and American pastime as comforting and nostalgic as fun sized Reese’s cups on Halloween or mashed potatoes on Thanksgiving. The drink’s season starts somewhere between the end of tank tops and the emergence of UGG boots, as adoring fans hail it on arrival and lament its depart, anxiously awaiting the next sign of an autumn breeze and thus the reintroduction of their favorite fall beverage.