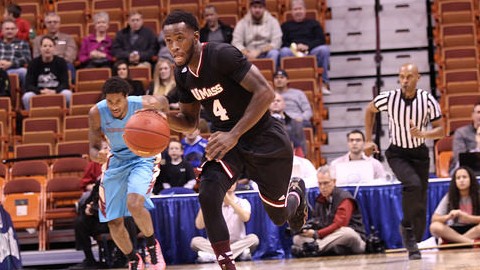 Everything about Rathan-Mayes’ shot was perfect: the release, the trajectory, even the follow-through. The only thing that went wrong was the result, as the shot fell halfway through the net only to trickle its way out, preserving the 70-67 lead for the Massachusetts men’s basketball team.

The Minutemen made five of their next six free throws in the final 29 seconds of the game to secure the 75-69 win against the Seminoles on Sunday afternoon in the Hall of Fame Tip-Off Tournament.

“It showed some character from the team to go against a big, physical team like that. They’ve kind of had our number the past few years and today we matched their physicality and athleticism,” UMass coach Derek Kellogg said.

It wasn’t the usual cast of characters that impressed for UMass tonight, as its bench carried the way in the victory. Reserves Donte Clark and Jabarie Hinds each led the team in scoring with 15 points.

Clark scored 13 of those points in the second half ,all coming within a span of six minutes, 40 seconds. During that same stretch, Cady Lalanne was the only other Minutemen to score.

“He’s starting to get a little more comfortable and we have more confidence in him … Hopefully he becomes that next option for us,” Kellogg said.

“I’m definitely more confident playing with these guys. I know I just have to get open,” Clarke said.

Although it was Clark who took control in the second half, Trey Davis’ jump shot off an inbounds pass from Derrick Gordon put UMass up 42-41 with 16:41 left. Michael Ojo converted a layup with 10:44 remaining to tie the game at 51-51, however Florida State could not take the lead following that sequence.

It was Hinds who shot the free throws following the missed Rathan-Mayes 3-pointer in the final minute, as he hit a single free throw to make it a two-possession game to put the Minutemen up by four, 71-67. Hinds scored nine of his 15 in the second half.

“It was a good win. It all started on the defensive end. We wanted to come out and pressure the ball. We wanted to make them take bad shots and cause turnovers and that’s what we did,” Hinds said.

The Seminoles opened the game on a 12-3 run in the first 3:51 and it looked like UMass was going to be in for another long day following Saturday’s 81-68 loss against Notre Dame. The Minutemen slowly clawed their way back into the game, as Gordon made a pair of free throws at the 8:25 mark to tie the game at 21. Sunday’s game featured nine ties and seven lead changes.

Rathan-Mayes led Florida State in scoring with 22 points while 7-foot-3 center Boris Bojanovsky finished with 18 points off the bench. The Seminoles leading scorer, Aaron Thomas played 15 minutes in the first half, but was taken to the hospital at halftime with an undisclosed injury.

Lalanne finished with 14 points and nine rebounds, making it the second straight game he’s failed to record a double-double after doing so in UMass’ first three games.

Despite the Minutemen’s strong start to the season winning four of their five games within a 10-day stretch, Kellogg believes that his team still has a long way to go and have much to improve on.

“We’re still a work in progress,” he said.