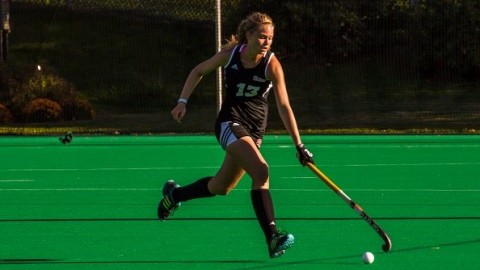 For the Massachusetts field hockey team, the confidence level is the highest it’s been all season, and it could not have come at a better time.

The Minutewomen are heading to Richmond this weekend for the Atlantic 10 tournament, having won eight of their final 10 regular season games. With the A-10 regular season title locked up, they earned the top seed in the conference tournament.

UMass has all of that riding for it when it plays Lock Haven in the first round of the A-10 Tournament. The Minutewomen enter the game 5-0 all-time against the Lady Eagles.

When asked if the 5-0 record gives UMass added confidence, head coach Carla Tagliente said she does not think so.

“I don’t necessarily think that,” Tagliente said. “Anything can happen in a tournament game.”

In their previous meeting on Oct. 3, three first half goals from Izzie Delario, Sarah Hawkshaw and Melanie Kreusch gave the Minutewomen a win over Lock Haven 3-0. Tagliente expects a much different game then the one they saw earlier in the season.

“We are expecting their best game,” Tagliente said. “I think that game was a lot closer than what the score said.”

The Lady Eagles will have plenty to say come game time on Friday. Lock Haven finished with a 6-2 record in conference play this season. However, it did not end the season in a particularly strong fashion, as it dropped its final two games of the regular season.

UMass, however, is a team on a mission. It posted a 7-1 conference record and turned its season around after a very slow start. The Minutewomen started the season 2-7 before reeling off eight wins in ten games, regaining their confidence and making the immaculate turnaround for a season that was heading in the wrong direction.

But this will not be an easy contest for the Minutewomen. Their main focus will have to be defending the tough front from the Lady Eagles. Nakira Downes and Rachel Valentine pace the Lock Haven offense. Downes has a team-leading 24 points, including nine goals, while Valentine has chipped in seven goals for the Lady Eagles.

“They have good front players who are very quick,” Tagliente said. “We need to stop them up-field before they can generate anything.”

UMass has focused primarily on its defensive front, according to Tagliente. The defense will have receive added bonus when Lauren Allymohamed returns after taking a ball to the face in the previous game.

Allymohamed is the captain and anchor of the Minutewomen defense that has improved their play from the start of the season. That defense will need to play at its highest level if it is going to be able to maintain the Lock Haven scorers.

“We have really focused on our defense all week,” Tagliente said. “In order to stop (Lock Haven), we need to organize quickly and stop them up the field.”

UMass is fortunate enough to have another anchor to that defense in goalkeeper – Sam Carlino.

Carlino has posted yet another outstanding season in net for the Minutewomen, as she posted 1.74 goals per game average and started every game this season.

The Lady Eagles have a stonewall of their own, as goalkeeper Elaina White has posted 1.35 goals per game average while making 74 saves on the season.

“(White) always seems to have big games against us,” Tagliente said. “She has an aggressive style, so we need to make sure we are in the circle ready for rebounds and deflections.”

Tagliente knows her team will be ready for the challenge this weekend, and is fully confident her team can get the job done.

“We have the ability to win it all,” Tagliente said. “We just need to believe in ourselves and play together.”

Tyler Fiedler can be reached by email [email protected] and on Twitter @Tyler_Fiedler.