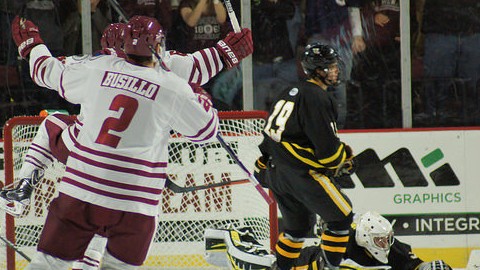 There was no upset for American International College this time.

Five different players found the back of the net for the Massachusetts hockey team as the Minutemen dominated the Yellow Jackets in a 7-1 blowout victory Friday night.

It was clear from the opening faceoff that UMass did not want to repeat last year’s 3-2 loss to AIC, beginning just 57 seconds into the game on a goal by freshman Dennis Kravchenko.

Kravchenko now has four goals on the season, and has scored in three consecutive games.

Coach John Micheletto stressed how important it was to get that Kravchenko goal early, but felt getting a three-goal lead quickly made him feel the most comfortable.

“Yes it was important,” he said regarding the opening goal. “Obviously we did it last Saturday too, but ultimately I think extending that lead to three is the elusive one. Anyone that’s covered the program in the two plus years I’ve been here knows that I’m a firm believer that the first team to three will have the best opportunity to win.

“I thought tonight particularly that getting from one-to-two and then two-to-three was what we were excited about.”

Senior forward Zack LaRue, who scored two goals while a potential third goal was negated for a player in the crease violation, was a member of the team last year that suffered the setback against AIC, and felt this win was extremely satisfying.

“You know, you try not to look back on stuff like that, but at the same time you kind of have a bitter taste in your mouth from last year,” said LaRue. “Like coach said, we wanted to make this more of a rivalry and get a fire going underneath us. I think we prepared well and we took it to them so it was good to see.”

LaRue’s two goals tonight give him four on the season, which is more than he had in his first three years with the program.

In tonight’s win, Micheletto said LaRue, along with his linemates Steven Guzzo and Dominic Trento, provide a good energy for the team, and was ecstatic to see a player like LaRue light up the lamp not once, but twice.

“Zack has been a great team guy for three years. He’s a good leader and a good teammate, and we’re seeing a little bit more confidence in his play,” said Micheletto. “It’s a tremendous reward for him. I don’t know if I’ve seen guys as excited for other teammates than they are for Zack when he scores.

“Nobody has worked harder and done it the right way more than him.”

He also added that despite not getting that third goal, LaRue will be the first to say that getting the win is more important than getting a hat trick.

Frank Vatrano, who did not partake in this contest last season, also recorded a two-goal performance, and assisted on a goal by Steven Iacobellis.

The redshirt sophomore, who was put onto a line with Iacobellis and Ray Pigozzi that recorded eight points, said he is starting to adapt to collegiate play.

“I think getting more comfortable and getting more games under my belt is helping me get used to the pace of college hockey,” Vatrano said. “My teammates have been great with me, helping me keep my head on straight and making sure I do all the little things right, so I give credit to them for keeping me going every game.”

Also scoring for the Minutemen was freshman Jake Horton, while sophomore defender Marc Hetnik recorded two assists to earn his first multi-point game as a member of UMass.

On this night, Micheletto felt every line played great, and believed it was a real team effort that got the win.

“I really liked the Guzzo line an awful lot tonight. I thought we got pretty balanced play,” Micheletto said. “I don’t know if I can point to any one line and say that they were better or not as good as the other, which is clearly what we were trying to do with our recruiting and expend our offense so we can have more depth for nights like tonight.”

Despite putting seven goals on the board, which is the most a UMass team has put up since 2011, Micheletto made it clear that the most important thing was getting one back in the win column, and will provide confidence moving forward.

“Winning is winning,” he said. “Winning solves a lot of what ails you and soothes a lot of bumps and bruises, and confidence especially with young men is really powerful, so I hope that this is the shot in the arm that we need moving forward.”