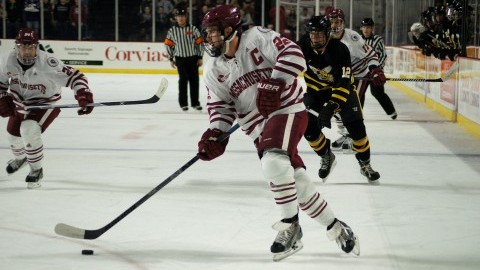 For the past four seasons, Massachusetts hockey team forward Troy Power has been a regular in the lineup for the Minutemen. When he takes the ice against Boston College on Friday, it will be 100th time that Power has played for UMass.

Boston College knocked off the Minutemen 4-1 in a game in Chestnut Hill on Oct. 25. He said accomplishing this feat against the Eagles definitely adds an extra incentive to mark this occasion with a win.

“I think it makes it special. I’m usually one of the most excited guys when we play BC,” Power said. “It’s just a game that for me, isn’t hard to get up for.”

Arriving on the scene in 2010 as a freshman, Power always had constant support from his family, but being from California, his father and brother were never able to make it to the East Coast for a game.

Along with his mother Rhonda, who makes an annual trip to see Power play, his father Thomas and brother Chad will be in attendance for the first time to see him play in his 100th collegiate game.

“My family will be in town this weekend, so that’ll be nice to share that moment with them,” Power said. “I think they picked a good weekend to make the trip in. Usually the atmosphere when we play (Boston College) is pretty loud and pretty full, so hopefully we get a good turnout and get the win.”

Head coach John Micheletto, who arrived in Amherst when Power was a junior, believes a player like him is extremely deserving of this achievement.

“The thing about Troy is that he’s such a level and positive person,” Micheletto said. “He comes to the rink and he’s the same guy every day and that consistency of him as a person, not only his approach to the game and his body and all the other things that go into being an elite athlete, is what has the respect of his teammates.”

Steven Guzzo, who is the other redshirt senior for the Minutemen, discussed his relationship with Power, as both came into this program in the same year.

“We lived together last year, and live in same building this year, so we’re extremely good friends,” he said. “We both have been through some injuries, so we have that in common, and we’ve both helped each other try and get through those situations the best we could.”

While there have been many positive moments throughout his career, it wasn’t all positive for the California native. Just 11 games into his junior year, he suffered a season-ending knee injury, forcing him to redshirt.

Returning to the level he is now hasn’t been easy, Power said, but it was the support from others around him that motivated him to come back even stronger.

“I think my family had a huge part in that, just helping me to stay positive, as well as my teammates and the coaching staff. There were some days when you’d get to the rink and it’s frustrating to not be able to play,” he said. “Encouragement from everyone around me and just sitting back and realizing that when the game gets taken away from you, it’s nice to step back and appreciate it. So I think I did that, and have taken that with me into my final year.”

Micheletto said Power’s return was a true indication of the kind of person he is and the work ethic he crafted over the years.

“Being able to come back and continue to be a productive player is a testament to the work that he has done off the ice, along with Jeff Smith helping him out,” Micheletto said. “He’s done the work, I never have any concern about that, so that’s put him in the best spot as a player.”

With 99 games under his belt, Power has had his share of memorable games, including an upset over then-No. 1 Boston College his sophomore year

“I think when we played BC my sophomore year and they were ranked number one, the building was pretty electric and we ended up winning that game,” he said.

“Fenway Park was another huge game, and was something that I’ll always remember for the rest of my life,” he added of UMass’ Frozen Fenway appearance in 2012. “You know, some people feel like they’re lucky to go and watch games at Fenway when they watch baseball, so it’s funny when I get to say I got to play out there.”

When the season finally comes to an end, Power will not look back at the stats he recorded or the records of the teams he was on, but the little moments he went through with his teammates.

“To me, when I look back at my career here, it won’t be a win or loss or a certain game,” he said. “It’ll be the friendships that I’ve made and the times in the locker room that I shared with the guys that I’ll miss most and cherish.”