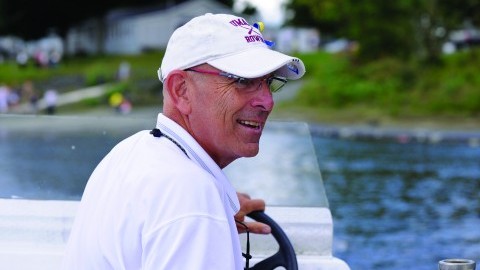 With silent strokes, I swiftly sail. A glassy pool reflects my flight, the shining stars, and moon, so bright. The world is sleeping, but not I; One with water, I start to fly.” — an excerpt from the artist and poet Margaret Gregory’s, “Moonlit Row.”

For those reading the morning paper or struggling to get through their first cup of coffee, the thought of waking up at 5 a.m. and silently rowing down a freezing river guided only by moonlight is simply incomprehensible.

But to many people who are, or have been, involved in the sport of rowing, there is no better sensation. For Massachusetts women’s crew coach Jim Dietz, this connection is a necessary part of life.

“I love the sport of crew and it has been part of my life for so long, but I wouldn’t do it unless I really thought it had value,” Dietz said.

But Dietz is not just someone who loves the activity of rowing. Over the years, he has built a reputation as a rower that is highly regarded in the rowing community both domestically and internationally.

In high school, Dietz won all the United States and Canadian Scholastic championships in single and double sculls from 1964 to 1967, as well as the first Junior World Championship in Germany in 1967. He continued to row through college at Northeastern University and then went on to represent the U.S. as a professional.

“Representing the United States was surreal in one extent, but in another, it was planned,” Dietz said.

“I always knew that I wanted to become a professional, so when I was rowing day-in and day-out, the surrealism faded a bit. After time I was able to approach rowing in a professional manner, expecting to get results because I was training so hard.”

After this retirement, Dietz said that he was working as a broker on the floor of the New York Stock Exchange when the idea of becoming a coach entered his mind.

“At the same time, my wife and I were living on Danbury Lake in Connecticut, which is where the idea of becoming a coach materialized. Being on a lake and being around boats my whole life, it was natural that people regularly came up to row with, and be coached by me,” Dietz said. “So it was actually my wife who asked me, ‘Why do Wall Street? Why not just coach?’ And shortly after I took her advice to do exactly that.”

He served as the men’s Olympic Quad Coach in 1988 and 1992 in Seoul, South Korea and Barcelona, Spain respectively. After leaving the Coast Guard Academy, Dietz signed on with UMass, where he turned his attention to coaching women.

“My arrival at UMass is a funny story actually,” Dietz said. “At the time, I was still coaching men at the national level, which was fortuitous for my women rowers. It just so happened that two of my UMass rowers met and married two guys I had been coaching. So I guess I created some happy households.”

But aside from being a champion rower, Wall Street broker and inadvertent “matchmaker,” Dietz was able to quickly turn the women’s crew team into one of the strongest squads in the nation.

Since Dietz’s arrival at UMass in 1995, the Minutewomen have won 14 Atlantic 10 Championships, 63 A-10 gold medals in 12 league championship events and have graduated numerous honor roll students. His success in Amherst has not gone unnoticed, as he was honored as the A-10 coach of the year eight times.

As the UMass crew team evolved into a rowing powerhouse, Dietz was also busy starting a non-profit rowing center and serving as a coach at the national level.

Some highlights of his national coaching era include a bronze medal at the 2000 Olympic games in Sydney, Australia and a fourth-place finish at the World Championship in Milan, Italy in 2003. His accomplishments with the U.S. National team as a rower and coach were recognized in 2010 when he was inducted into the National Rowing Hall of Fame. Dietz is now also serving as the vice president of USRowing.

In this position, Dietz said he is aiming to be an advocate for change in the sport of crew.

He said his vision moving forward is to give every collegiate rower in the country an equal opportunity to be recognized at the national level. To do this, he believes that crew needs to return to being an individual team sport – like track and field – rather than a team sport concept, as it exists now.

Dietz theorizes that if the college level added single, double and quad sculls – meaning only one, two or four people rowed in each boat – then success would be much more accessible to the individual.

The current format that Dietz believes is inherently flawed is this: In the sport of college rowing, each boat is comprised of eight rowers. Of those boats with eight rowers, it is those with the fastest times who get the chance to compete nationally. The shortcoming in this setup though is that strong individuals rowing for weak teams will never be recognized.

Unlike track and field, where individuals can qualify for events regardless of their team’s success, rowers are wholly dependent on the overall success of the team.

“The problem is that there are some small schools with incredible athletes, but they never get recognized because boats are rated as a team,” Dietz said.

“This means that you could have the fastest rower in the country who is destined to go to the Olympics, but because their team isn’t at the same level as a big school – that perhaps qualified with lesser individual talent – then that gifted athlete from the small school won’t ever have the opportunity to prove themselves.”

Dietz’ vision is not limited to success on the water, as Andrea Morand – former UMass rower (2005-2009) and current assistant head coach of the women’s crew team – would tell you.

“As a coach he truly does his best to give you the tools to succeed at the highest level,” Morand said.

“He doesn’t just stand behind you and push you to your maximum limit. Instead, he’ll say, ‘I’m available after 1 p.m. today. Give me a text or a call and we can go out for a second workout, or come into the office to watch film to go over your technical aspects.’ He even has his apartment right next to the boathouse, so he is ‘literally’ always there for you, and I don’t think those things can be said about many other coaches.”

For Dietz though, this dedication is an absolute necessity in order to fully develop the skills that crew teaches. Watching his rowers grow into well-rounded, responsible and highly motivated people is what he said he finds most rewarding about coaching.

“Over the 20 years that I’ve been here, I am proud to say that I have had a number of doctors, lawyers and other extremely successful people that have taken what they learned from the program, become mentally strong because of the program and applied those skills to their daily lives,” Dietz said.

As an active member of the U.S. rowing community, Dietz said he is thrilled to see his old rowers take initiative by helping expand and introduce, the sport across the country. Amanda Kraus – a member of his first boat at UMass – has done exactly that since graduating in 1995.

Athletes like Morand, Kraus and a number of other rowers Dietz has influenced over the years have all gone on to apply the skills crew helped developed, whether if it was directly related to crew or not.

As a result, these rowers have been able to touch other people’s lives largely thanks to sport. In this sense, crew is about more than just breaking records, winning titles, or competing in the Olympics and perhaps, even more than striking that feeling of “oneness” with nature that accompanies early-morning rows.

It is a combination of all those things that has kept Dietz so passionate about crew over the years. For Dietz, his goal is to make a significant impact in the rowing world, one stroke at a time.

Nick Casale can be reached at [email protected]