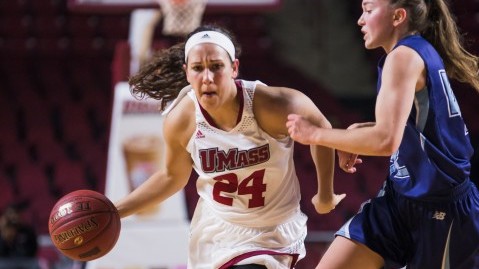 The Massachusetts women’s basketball team came into Wednesday night’s game searching for its first win of the season. Behind a true team effort and 13 second half points from forward Kim Pierre-Louis, the Minutewomen tasted victory, defeating Maine 68-60.

“I thought it was a great team effort,” head coach Sharon Dawley said. “I thought Kim was phenomenal from steals to showing off her speed and strength …We played a lot of people. I think everyone contributed one way or the other. I thought the freshmen grew up right before our very eyes … Overall, I think the team did a great job.”

Pierre-Louis – who has scored in double-figures in each of UMass’ first three games – racked up 19 points on 8-for-16 shooting with seven rebounds, was 3-for-5 from the free throw line and added three steals to wrap up an impressive night.

“I saw that I was struggling a lot (in the first half) shooting wise,” Pierre-Louis said. “Coach was telling me to be more aggressive, start driving, posting up.”

Forward Rashida Timbilla scored an efficient 14 points on 6-of-8 shooting, with five rebounds and a game-high six assists. Timbilla also acted as the Minutewomen’s shutdown defender despite playing a game-high 35 minutes.

“I think we felt that Sunday (at Central Michigan) we should have had that win,” Timbilla said when asked about winning their first game of the season. “But we used that momentum to come out and show what we are, how we’re a different team this year. So it does feel good, it’s a weight off our shoulders, but we just have to continue.”

After falling behind early, the Minutewomen went on an 11-0 run with just over 14 minutes left in the first half, sparked by a Timbilla layup. The half ended with the Minutewomen up 32-25. They wouldn’t relinquish that lead for the rest of the night.

The shot chart from Wednesday night’s game paints a vivid picture; the Minutewomen dominated the Black Bears in the paint all night long, outscoring Maine 34-16 in the paint, and out-rebounding them 32-24. Kymber Hill, who came into the game with four points and seven rebounds on the season, scored 10 and pulled down eight rebounds on the night.

“Kymber, on the boards, just cleaned it up for us,” Dawley said.

“It felt good. Before the game, I prepared by reviewing film from the previous games and I felt like I needed to be more aggressive,” Hill said.

Maine came into the game shooting just 13.3 percent from beyond the 3-point line, but attempted an astonishing 36 shots from beyond the arc. The Minutewomen defense bullied the Black Bears out of the paint, blocking passing lanes and forcing them to take longer shots. Maine made 11 tonight, which was good for 30.6 percent.

Both Sophie Weckstrom and Lauren Bodine contributed to the dismal shooting performance as the pair each went 2-of-9 on 3-pointers. Mikaela Gustaffsson and Sigi Koizar each led Maine with 12 points apiece.

With less than three minutes left to go, Maine gave UMass a bit of a scare, hitting back-to-back 3-pointers to pull within eight points. But Minutewomen guard Emily Mital drained a 3-pointer of her own on the Minutewomen’s next possession ending any possible collapse.

With just one home game in its first five contests, UMass made the most of its lone appearance at the Mullins Center. Now the task will be to carry this momentum to Texas, where the Minutewomen will compete in a mini-tournament hosted by North Texas University.