Brandon Montour: ‘It felt great to be out there’ 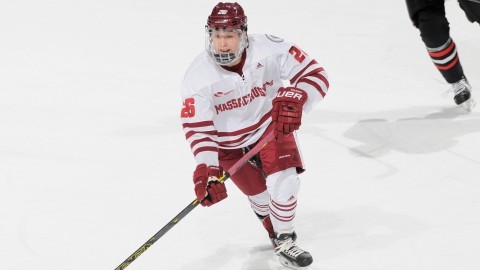 Winter break is officially underway, which means that most students are busy sleeping in, or glutting themselves with holiday cookies (or at least one is). But this holiday break means something very different for a member of the Massachusetts men’s hockey team.

Freshman Brandon Montour, a 6-foot 190-pound defenseman, made his first start for the Minutemen Tuesday night in an 8-3 loss against Northeastern. After being ineligible to play, or practice, with the team in the fall semester, the highly touted recruit – who was recently taken in the second round of the 2014 NHL Entry Draft by the Anaheim Ducks – finally saw his first minutes on the ice.

“It’s been a long road for sure. I’ve only been here three days, but I really like all the guys and they have done a great job of trying to get me up to speed on what they are doing. It felt great to be out there,” Montour said.

He arrived in Amherst on Sunday after driving from his hometown of Brampton, Ontario and practiced on the same day. In total, he practiced twice with the Minutemen, and admitted to being rusty. He played 17 games this season with the Waterloo Blackhawks of the United States Hockey League.

Montour started the game on the first line, paired with senior defensemen Oleg Yevenko and had to quickly adjust to the speed and physicality of the collegiate game.

“The size and speed of the guys were the biggest challenge. It definitely took some time to get used to,” Montour said.

But despite feeling his youth, he involved himself in the play right from the get-go, blocking a shot and snuffing out a 2-on-1 Northeastern attack.

“Like I said it was tough to play against bigger players and I felt a little rusty at the beggining, but after a few minutes I started to sharpen up and felt a lot better,” Montour said.

On the night, he showed relatively well on the defensive side. The Huskies attack though, was simply too precise in its passing and was deadly accurate with its finishing – scoring the first four goals on just five shots.

On the offensive side, however, he looked stronger. The young defensemen showed his ability to break out of the zone with speed and join the attack, string passes together and get into dangerous areas.

“I felt like I was able to get into some good attacking positions, something I think my teammates were a bit surprised by,” Montour said.

However, the acclimation to his new surroundings showed when he was penalized for taking a shot after the buzzer in the first period – a penalty the Minutemen were later punished on.

“I honestly didn’t realize the buzzer had went, I just got the puck, spun, and took a shot as it went off, I didn’t mean to do that. But overall I thought I did pretty well,” Montour said.

UMass coach John Micheletto was pleased with what he saw in Montour’s debut.

“He’s a really talented kid. From what I saw, I thought he played well,” Micheletto said. He gave us great energy and his being here really gives us something to build around.”

While his future is bright, Micheletto made sure to manage the expectations of the young player saying, “He’s only been here three days and he’s barely played with our guys at all. As talented as he is, he can’t carry the team single-handedly and it’s going to take time to bring him along and up to speed.”

While his debut was largely spoiled by the 8-3 steamrolling, it’s clear that Montour will play a significant role in the young teams future and will look to gel with his teammates in the coming weeks.