Cady Lalanne continues to evolve as a potential outside shooting threat 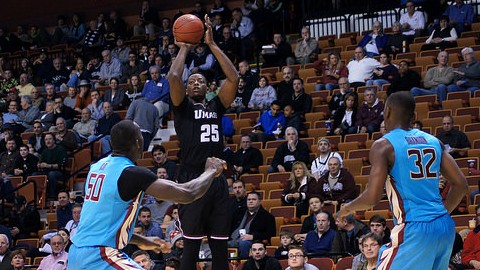 It’s become commonplace to sit at an opposing team’s press conference following a game against the Massachusetts men’s basketball team and listen to the opposition’s coach speak about the struggles of defending UMass center Cady Lalanne.

But what isn’t usually talked about is Lalanne’s penchant for stepping out of the paint. Yet the senior center has taken a liking to attempting at least one 3-pointer in every game, usually to the surprise of his defenders, which rarely follow him out beyond the arc.

For a player of his size, he has a steady 3-point stroke. But up until Saturday’s game against Canisius, it hadn’t translated from practice to games.

UMass is shooting just 29.5 percent on 3-pointer this season and is making only 3.8 per game. Despite Lalanne’s first role as a post presence, the Minutemen could benefit from a consistent threat from beyond the arc as well.

“There were a few games where we could’ve used him,” Kellogg said. “Like he’s wide open and misses them in crunch time. So I figured when we were up 19 (points) he’d make it.”

Lalanne’s basket came at the tail end of the Minutemen’s final possession of the first half, with the team actually leading by 22. UMass guard Jabarie Hinds found Lalanne on the wing with five seconds remaining and Lalanne buried the shot to push the lead to 46-21 before halftime.

It was the last of three straight UMass 3-pointers to conclude the half on a shooting barrage.

“It felt good to finally see one go in,” Lalanne said.

Through 10 games this season, Lalanne is 3-of-13 on 3-pointers. He had missed his last six attempts and his last made 3-pointer before Canisius was in a win against Florida State on Nov. 23.

“Not really, because I don’t want to be focused on (3-point shooting) as much as Trey (Davis,) Jabarie and them,” Lalanne said.

Kellogg said he doesn’t have an issue with Lalanne taking 3-pointers, as long as it falls within the context of the offense.

“It’s kind of one of those things where if it goes in, it looks like a great shot,” Kellogg said. “And when it doesn’t go in everybody s yells ‘Why isn’t he around the basket?’ He’s such a good shooter, if he’s open you don’t mind him taking them.”

“The process has been: if it’s there, take it,” Lalanne said. “I know, at the end of the day, if I make it, it’s a good shot. If I don’t make it, it’s a bad shot. It’s a win-lose situation, so I want to make them. It’s not something that we focus on, because I’d rather be in the paint more.”

There have been occasion’s this season where Lalanne’s long-distance bid clanged off the back iron or went woefully astray. According to a smiling Lalanne, when that happens, he knows Kellogg will have something to say to him.

“If they’re not falling, DK will be the first one to tell me to get in the post,” Lalanne said. “But if it’s falling, he doesn’t say anything. I just know, if it goes in, he doesn’t have a problem with it. If I miss, then I’ll hear about it.”